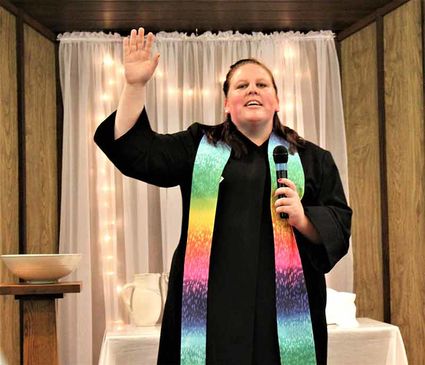 About seventy congregants, church officials, friends and family gathered recently to celebrate the ordination of Maggie Lewis as a new Presbyterian Minister of Word and Sacrament and install her as the pastor for the Chinook and Havre Presbyterian Churches. Ordination officially recognizes that a person has completed the educational and spiritual requirements to be a minister and installation approves an individual for a specific role at a particular church.

Maggie's ordination and installation were held simultaneously since Maggie recently completed the requirements to be a Presbyterian minister and was then called as pastor to the two local churches. The ceremony was held at the Chinook church and attended by both congregations. After the benediction in Chinook, a reception luncheon was held in Maggie's honor at the Havre church with members of both churches attending.

Among the attendees at the ceremony were Maggie's parents, Jim and Nancy Lewis, and three additional friends from her home church in the San Francisco, California area. Maggie invited Reverend Dr. Beth McCaw to help celebrate her first communion as an ordained minister. McCaw is the Pastor to Students and Associate Professor of Ministry at the University of Dubuque Theological Seminary where Maggie completed her seminary studies. Other ministers and church officials from Presbyterian Churches in the Glacier Presbytery (an association of the 18 most western Presbyterian Churches in Montana) also participated in the ceremony.

Part of the ceremony included a 'charge to the congregations' and emphasized congregants role in supporting their new pastor. Rev. Jack Mattingly who brought Maggie to Chinook six years ago as the first YAV (Young Adult Volunteer program) said in his charge to the congregations, "'YAV Maggie' is not the same as your new 'Pastor Maggie.' Unlike her time as a YAV, she is not here to serve you. As your pastor she is now your leader and is called to challenge and guide you." 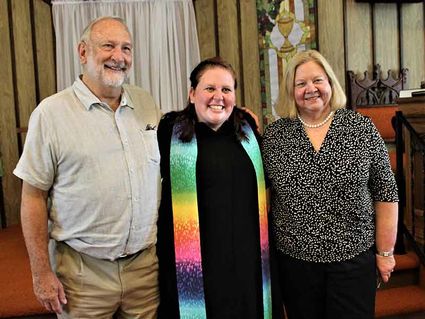 Reverend Maggie Lewis, center, is joined by her parents at the end of Maggie's recent ordination and installation celebration. Maggie's parents, who live in the San Francisco area, attended the ceremony as well as three friends from Maggie's home church in California. One of Maggie's professors from Dubuque Seminary also participated in the ceremony.

The YAV program, just completing its sixth year in Chinook, is an ecumenical, faith-based program that brings two or three 19-30 year-olds to town for a year's stay. During that year of service they work in a variety of programs in the community and local churches. A number of speakers during the ordination and installation service said they always believed Maggie had developed a strong attachment to the local area and people during her year in Chinook. When both the Havre and Chinook churches were looking for a minister to share, Maggie had just completed her requirements to be a minister. Approached about serving as a minister on the Hi-line Maggie said immediately, "Yes, I'm definitely interested."

The whole process started when Maggie came as a recent college graduate to serve on the Hi-line and possibly discern a call to serve as a minister. Six years later after completing an additional graduate degree, three years of seminary and going through the rigors of ordination, Maggie was welcomed into her new role as minister and leader of the sister congregations. The "Journal" applauds Maggie on her ordination and installation as a new minister and congratulates the Chinook and Havre churches for selecting Maggie as their new leader.