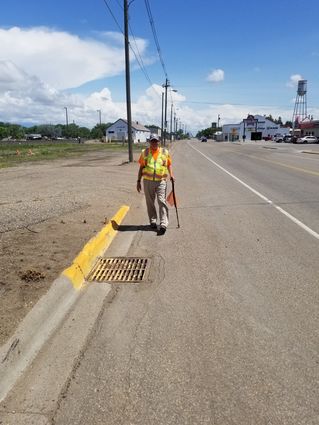 Glen Koster is walking from Florida to Washington to raise awareness for the need of more Foster Parent and Adoptions. Glen hopes to be swimming in the Pacific Ocean on August 26 of this year. Recently he passed through Blaine County and sat down with us for a visit.

When Glen Koster made his way into Chinook he experienced the highs and lows of walking across America. First he came across a huge Rattlesnake along the road, the first one he had ever saw, which left him at a standstill. A short while later a generous individual brought him a pink lemonade from Bikini Coffee.

Glen and his wife Charlcie are in the home stretch of a two year journey across America, on foot, to raise awareness of the need for Foster Parents and Adoption.

Glen himself is a foster child and shortly after being placed with his foster parents at age seven they became pregnant. His foster parents had twins and it didn't take long for him not to fit in. He was often left in the care of a cousin that did things to him that shouldn't be done.

As an adult Glen contacted his foster parents and met them in a bar/restaurant and asked them about his birth parents. The couple was not given any information and didn't have many details but the waitress had been eavesdropping a bit and thought he could put Glen in touch with his real dads sister.

A short time later Glen seen his Aunt for the first time in 27 years. She immediately recognized him and welcomed him into her home.

Glen's birth parents divorced in 1967. His Dad was a disabled Korean War Vet who had spent two and a half years in a Prisoner of War Camp and Mom was a nurses aide at the hospital that treated him after he was released and that's how they connected.

After the divorce Glen and his two older brothers were supposed stay with his aunt while they looked for work. Turned out the three boys, age six, seven and nine lived in a log cabin by themselves for six weeks when the aunt failed to pick them up.

Eventually the boys were made wards of the state and custody was awarded to the aunt, who failed to pick them up. Months later the trio was taken from the aunt.

Glen's two older brothers had a different dad and they were kept together leaving Glen by himself. The brothers real Dad eventually came back for the both of them and Glen was put up for adoption.

27 years later Glen reconnected with his brother Jim at Los Angeles International Airport and a short while later the three brothers walked into their Mom's house with Glen trailing his to older brothers.

When his Mom saw him for the first time in nearly three decades she let out a scream. She rushed to her bedroom to get his birth certificate she had hanging on her wall as a constant reminder of the son she never expected to see again. "She gave it to me and said I don't need it anymore," Glen recalled.

The reconnected family had a great Thanksgiving together and each ones life improved considerably following their reunification. His brother Warren is an Agoraphobic and hadn't been out of the house for 10 years. Six months after reuniting he was out of the house and back in the work force.

"Within 6 months of reconnecting with me he was not only out of the house; He had a job, and within a year he was married. My brother who was doing time for drugs has been clean and sober since that time. Both of them credit connecting with me and their life being complete again," said Glenn.

"Knowing that I know I have to help others, so that is part of why I extended on the walk," added Glenn. "We are funding this walk on our own, it's simply an informational walk."

Glenn is well aware of the numbers and how far reaching the problem is, "There are 520,000 kids in the country that are in foster care. 100,000+ that are waiting for forever homes. In Montana there are 1600 kids in foster care. Last number I had, there were a hundred and twenty something waiting for forever homes. So it's a problem in every state."

Many years after seeing his birth father Glenn returned for another visit, this time he looked him in the eyes and said, "You're Forgiven". Many years after being placed in the system Glenn learned that his father had told his mother that he would be better off when they received the summons to take him.

Glenn's father was abusive in his first six years of life, physically, emotionally and sexually. "To look him in the eye and say he was forgiven wasn't for my birth father, it was for me," added Glenn.

The foster care and adoption system is very important to Glenn on an obviously personal level. Glenn himself cannot be a foster parent or be involved directly in the adoption process because as he put it, "I am a recovering alcoholic, sober May 27, 1989. Since I cannot be a foster or adoptive parent, this is my time to give back - by walking to raise awareness."

Charlcie has read 105 books since they left Florida while she waits for Glenn at each stop. Most of the books she has read have been Little Christian pocketbooks.

Every night they plan out their day - mileage, where they are walking to etc. They check in, call, every hour, on the hour. Either she'll call him or he will call her. If they are in a rougher area it's every half an hour.

Planning for this trip originally began in 2015 and once they actually got to planning all of the details it took them about two years to fully organize the trip.

Originally they were going to go from Seattle to Florida that way they could celebrate in Disneyland but later changed their mind and reversed the course. If they would have gone the other way they would have hit all of the "bad seasons", hurricane season, flood season, snow...

They were supposed to be done with the trip a year ago but Glenn was diagnosed with Graves disease, which is when your thyroid goes into hyperactive mode. Glenn lost 40 lbs in seven weeks before eventually going into remission.

As they went through Nebraska he lost ten pounds in seven days and started showing, what could potentially be, symptoms of the disease again. Turns out that the second time it was just his body saying 'I need a rest.' So they started up again on May 18th.

Glenn walks 22 miles a day 6 days a week. Sundays and holidays are rest days. So far because of weather and RV issues they are behind five days. They have had weather issues at every state line except Montana. From tornadoes to snow, hurricane - they've seen it all. They were in Hinsdale when we had that big storm three weeks ago.

In July of 2018 the couple was forced to interrupt their journey across America. "For starters it's an unnerving feeling when you park on a slight downhill incline, set your brakes, and then you begin rolling downhill," stated Glenn. "When the local mechanics tell you they have done all they can do, you simply head for home to regroup."

Eventually they got the RV fixed and with Glenn's health improving they restarted their journey on May 18th of 2019. Glenn expects to be swimming in the Pacific Ocean on August 27th of this year.

Before he started walking Glenn spent 40 years in information technology and retired in 2017. When asked if he enjoyed it he said "I loved it all, except the last 5-6 years in the late 80s." Stress caused major complications that led to a number of surgeries. As a result he turned in his resignation as soon as he was able to go back.

"I've said that if one family becomes a foster family or one kid gets a forever home all 9 million steps will be worth it."

Glenn's approach to walking to raise awareness began back in 2011 and when asked how it all began he said, "That's not an easy answer. Lets start with, in 2011 I lost a bunch of weight because I didn't like where I was. In 2012, Eaton, where I worked, had a fitness challenge based on the number of steps we could walk, and I won that going away... of course I cheated. I was working full time at Eaton as a data analyst while also working part time at Wal-Mart. I was a reporter for the Harvey County Independent and I was going to school full time not to mention dating my wife. So, I was constantly on the go. But after that, the first inclination of doing something beyond that, I decided to walk from Oklahoma to Nebraska to see if I could do a long distance walk. 187 miles in 10 days, and that went okay. So, we decided to go from Eve, Missouri to Harvey, Colorado the next year; that's 487 miles, I wanted to do in 22 days. I got shut down three times for medical reasons during that walk, but I did complete it. That was my first ' let's do something beyond just walking', I actually raised money for Central Kansas charities related to kids – and I raised almost $10,000 as a result of that walk."

Glenn added, " She's been involved in that, and I've been involved in other things. In 1989, I was a volunteer at DePelchin Children's Center, in Huston. I was helping people find their birth families before the Internet was a thing. We would always ask them two questions: 1. Why do you want to find your family? If it was simply, 'I'm just curious', we would tell them we can't help you. They had to have a legitimate reason, be it medical or otherwise. The second question we would have to ask them is: are you ready to be rejected again? Because at that point almost 80% of all connections ended up in rejection again. That number has gotten much better with open adoption laws only about 40% are rejections now. But still, it's a reality, you reconnect with a birth family, its likely to happen."

In the end Glenn and Charlcie have rid themselves of many of their possessions and live entirely out of their RV and take on the challenge of raising awareness for foster care and adoption proceedings. They aren't raising money or trying to get people to give to them, they want to spread the word about this problem and hopefully some of the people they encounter will become Foster or Adoptive Parents as a result. 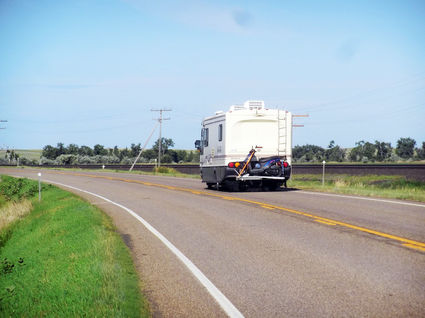 Glenn Koster has done all the walking, but his wonderful wife Charlcie has accompanied him every step along the way. The two are in communication throughout the day, calling each other every hour while he is walking. Charlcie and Glenn live entirely out of their RV after selling their home to fund their journey.