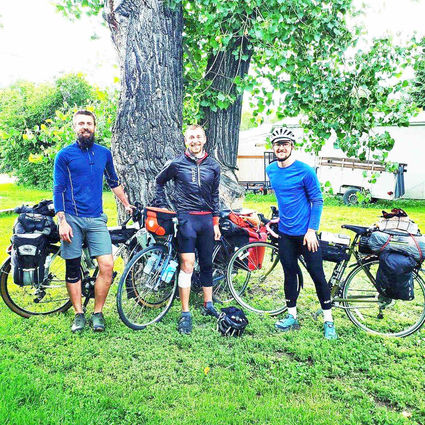 Genevieve hosted her first cyclists of the year on June 20. Taylor, Robert and Kevin, who call the Seattle area home stayed the night.

We have all seen them, cyclist trekking along U.S. Highway 2. Generally, those cyclist are heading east the first part of summer and west as fall approaches. We see them individually or in groups of 2-3-4. We see them camping in the city parks, at gas stations and occasionally in the local grocery store. But have you ever thought about the logistics of such an adventure? Where do they get their route from, where do they eat, sleep or shower or even, why do they do it.

Harlem resident Genevieve Cochran has been providing a worthy service for the past eight years hosting these cyclists traveling across the country. Genevieve earned her degree in Business from Salish Kootenai College in 2012 and currently works as Patient Register in the Emergency Room at IHS Hospital at Fort Belknap Agency and is the first person patients see upon entering the facility.

The path to becoming a host began simply enough as a term paper her senior year as a business major at Salish Kootenai College. "I was given a 10-page term paper to research something within our community. I was swimming for eight years during the summers in Harlem and I would see the cyclists come through. I would visit with them, say hello and everything and decided that they would be the basis of my paper," said Genevieve.

She came across the Adventure Cycling Association based out of Missoula while doing research for the paper. That led to her contact information being included on their bi-monthly newsletter. In no time she had 1,000 responses offering to help her with information to use. "I came up with about 40 questions that I sent out in an email. Some pertained to overnight stays, housing, food and supplies," said Genevieve. "Through those emails I learned about Warm Showers. I looked over their website and determined that I would like to volunteer as a host."

After moving back to the Harlem/Fort Belknap area eight years ago, she hosted her first guest on July 11 of 2013. "Zach and Ryan just graduated from two universities in Boston hadn't had a warm shower, meal or slept inside. I was nervous because it was just me and my kids at the time," said Genevieve. With her was her daughter Chloe, who was eight at the time and her twelve year old son Tevin. "Everything turned out really well and eight years later I'm still friends with them on social media." 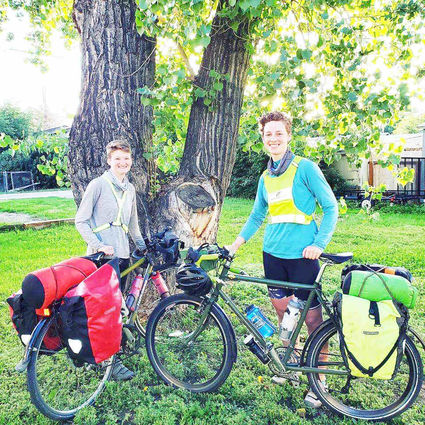 Genevieve Cochran's most recent cycling guests were Emily and Charolette from the Washington D.C. area.

Genevieve is very active on social media and keeps friends and family updated with each guest she hosts. "I post all my guests visits and it helps their families know where they are at and see they spent the night in Harlem, MT. I have a guestbook and almost all have signed it. I cook really good food for them, and my friends really like to read about my guests and a learn little bit about them," added Genevieve.

Chloe, now 16, is into hosting as well and is involved as much as Genevieve is. In the past eight years Genevieve hosted cyclist in Cut Bank for two years and Harlem for six. Prior to that she lived in Flat Head for eight years and considers herself pretty versed in what happens along highway 2. "I try and share the campground locations, where to stop, construction, whatever information I have with my guests." Through the years she estimates that she has hosted more than 100 guests, "In a summer I can host around 15 times a year and each visit usually is between one and four people. Four is the most I've had at once.

Sometimes the guests aren't part of the same group, "One time I had one going one direction and another going the opposite way. They stayed the same night got to know each other and eventually stayed in contact. All have been super nice and are a friend for life," stated Genevieve. "They are grateful for her helping with their journey and they have no expectations. We don't have to feed them or let them stay inside, but I'm hosting, and I enjoy doing it. They offer to help out, stop at the store or get dessert. My favorite part is when they do the dishes. They tell me if I am ever in their town, they will show me the sights take me in and return the favor. It is all very rewarding." Follow gencochran on instagram to view all of her stories dating back to 2013. If you want to become a host contact warmshowers.org to register.