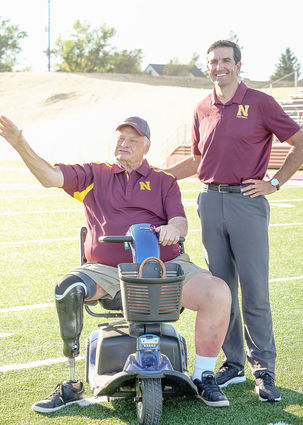 Mike Tilleman and his family are well known throughout the area and far beyond. The Mike Tilleman family spearheaded by the efforts of Mike himself were deservedly honored by Montana State University Northern (MSU-N) and the Light Football team recently. MSU-N has been working diligently, first securing funds (An on-going endeavor), then putting into action the designing of and construction of a new field on campus for the Lights to call home. On Wednesday, August 26, MSU-N Chancellor Greg Kegal and Light Head Football Coach Andrew Rollin held a ribbon cutting ceremony with Tilleman and his family present as they christened 'Tilleman Family Field'.

Mike has been the rock behind college football returning to Havre after a long hiatus of not competing. Football at Northern was abandoned after the 1971 season and wouldn't return for nearly three decades. Tilleman is widely recognized for his nearly solo effort in not only bringing football back, but keeping it financially afloat in the time since. The on-Campus project came to fruition as part of Privately Funded $3 Million Capital Campaign. In addition to the football field, stage three of the project will include a three-story structure designed to house the football headquarters as well as a bookstore, full-service kitchen to support on campus projects and a second indoor basketball court as well as lighting and parking.

The MSU-N website offers plenty of praise to Mike Tilleman and his family, notably comments made by Chancellor Kegal, "It is safe to say that MSU-Northern's football program and this stadium would not be here today if it had not been for Mike Tilleman. Mike was instrumental in getting Northern's football program started twenty years ago. At that time, he started the Northern Lights Athletic Scholarship Foundation, which has contributed several million dollars to our athletes and our athletic programs over the years, and he provided the lead gift which built the momentum necessary to make Northern's new football stadium possible."

Mike Tilleman grew up on the family farm in Zurich before becoming a force on the football field for the Chinook Sugarbeeters. Upon graduating from Chinook Mike had offers to play college football at the University of Montana as well as the University of Washington. Tilleman eventually picked Montana and went on to play three seasons for the Grizzlies. Tilleman earned Second Team All-Big Sky honors as a defensive lineman in 1963 and 1964.

Tilleman vacated his senior season to play professional football where he was selected 163rd overall in the 1965 Draft by the Minnesota Vikings. Interestingly, Tilleman had been drafted earlier by the Kansas City Chiefs but chose the latter because the National Football League (NFL) was stronger than the American Football League (AFL). After the two leagues merged Tilleman was selected by the New Orleans Saints in the expansion draft. He then moved on to play for the Houston Oilers, who bought out his contract after two season and then traded him to the Atlanta Falcons for a first-round draft pick.

Tilleman finished his career in Atlanta and then return home and soon opened up Tilleman Motors in Havre. Mike and his wife Gloria would go on to raise three children: Suzanne, Christopher and Craig, while becoming fixtures in the community.

Tillemans legacy ran string in the halls of Chinook High School for many years to follow. Tillemans jersey was displayed prominently in the trophy cases for fans to see as they headed into the gym to watch a basketball game. Students who attended school in the 1970's and 80's all new the Tilleman name, especially when two Tilleman's, Roxanne and Thomas were making a name for themselves on the hardwood. It was something kids looked up to, someone they maybe, knew or seen that played in the NFL. On occasion he offered some assistance to area athletes including the junior high football team in the early 80's.

Beyond his time on the football field Tilleman became heavily involved with the local college which soon became known as Montana State University-Northern. Tilleman established the Northern Lights Athletic Scholarship Foundation raising millions of dollars in the time since its inception.

Extending his reach beyond the city limits of Havre, Tilleman created a 'Pheasants for Light' celebrity hunt that involves local landowners from around the area. Each fall several former NFL players as well as National Hockey League players and a few additional celebrities come to town to join landowners and guides in a pheasant hunt. Numerous events are tied into the gathering, but it is all done to raise money for the University. All proceeds go directly the Athletic Scholarship program and is used for scholarships and the salary of one full-time coaching position. 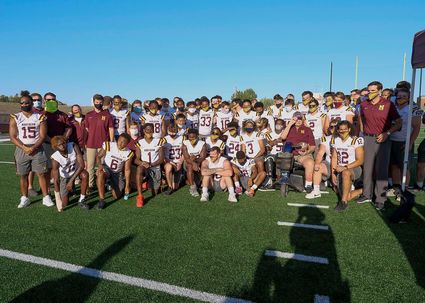