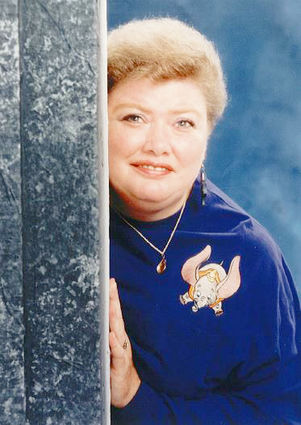 Barbara Lynn (Benson) Weber was born April 30, 1951 to Russell and Cora Benson of Harlem, Montana. She graduated from Harlem High School in 1969 and went on to study fashion in Portland, Oregon. Barb lived and worked in Great Falls and in Florida before moving to Denver, Colorado where she made her home for many years. During that time, she worked at Montgomery Wards and then at Molberg's Jewelry where she developed her great love of jewels of all kinds. Eventually she became a Certified Gemologist Appraiser and went to work for Tiffany's Jewelry.

In the mid 1990's, a friend that she had worked with years before at Montgomery Wards, Stan Weber, returned to the Denver area. His love of the circus and her love of elephants brought them even closer together. Their friendship blossomed into romance. She and Stan were married on June 14, 1998 in Chinook, Montana. What a wonderful day that was. Friends and family were gathered to celebrate her parents' 50th wedding anniversary. Unbeknownst to all but a few, she and Stan made plans to be married right then and there. That was the happiest day of her life.

In 2008 Barb and Stan moved to Chinook to be closer to family. Barb went to work as a receptionist for the local eye doctor, Dr. Obie. She loved her job because she loved people, and this gave her opportunity to get reacquainted with many she had known early in life plus meet many new friends.

Barb and Stan became members of Chinook Alliance Church and it was there that her faith in Jesus grew and grew. She loved anything that had to do with learning and serving through the church. Her involvement with the summer lunch program, Loaves and Fishes, was one of her favorites. She lost her beloved Stan in September of 2009.

Although she never had children of her own, she dearly loved her nieces and nephew, those in the states and in England. And when they provided her with great-nieces and nephews she couldn't have been more thrilled. She loved special outings with June and Emily and also lunches with special friends from high school.

Barb had some health issues which caused her to make the decision to retire. She moved into the Grand Villa Apartments in Chinook in December of 2019 and quickly made some very dear friends.

She was diagnosed with kidney cancer in the summer of 2020. She fought hard, determined to beat it in spite of many setbacks. Rapid changes in her health caused her one remaining kidney to be overwhelmed and she died on March 17th at Northern Montana Hospital in Havre.

Barbara is survived by brothers Bernard Bell and wife Mary of England, Bruce Benson and wife Terrie of North Carolina, sister Betty Billmayer and husband Mark of Chinook, six nieces and one nephew, eight great-nieces and three great-nephews, her aunt Gen Benson of Helena, honorary family member June Reynolds and many wonderful friends, and her dog Tiffany. A special thank you to the Doyles for providing Tiffany with a home.

She was preceded in death by her husband, her parents and several aunts and uncles. She will be buried on Wednesday March 24th at 9AM at the Harlem Cemetery followed by a memorial service and reception at 11AM at the Commercial Building at the fairgrounds in Chinook. Arrangements are being handled by Wilderness Funeral Home.

Barb had a huge heart and truly loved people. She will be missed by many. Memorials are suggested to Chinook Alliance Church, Special Olympics, The Grand Villa, or a place of your choice.