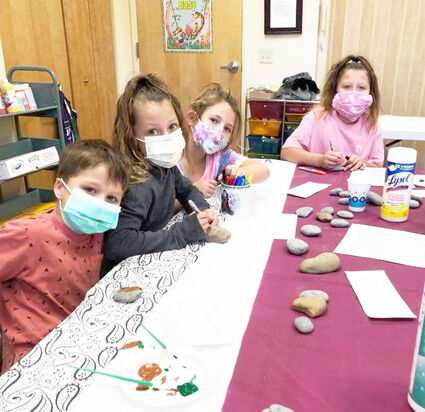 Participating in the Harlem Public Library's Rock Painting Party on September 16, Taio, Vada, Remedy, and Zaya found pleasure in the opportunity to be creative and artistic.

Although Pokémon Go was all the rage a few years ago, a more low-key, unplugged treasure-hunt trend is steadily growing in popularity in Montana communities: finding painted rocks. In an effort to join the trend, the Harlem Public Library hosted a Rock Painting Party on Thursday, September 16. People gathered at the library from noon until 6:00 p.m. to support the Harlem Rocks! movement. Library staff estimated that 45 people came and painted rocks.

The movement began in Harlem after a patron visited the library with her grandchildren who had found a rock in Lewistown with a message. That...