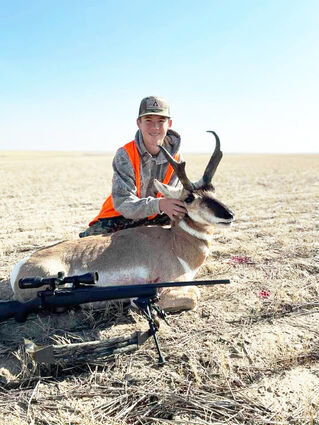 Jacob Metcalf got his hunting season off to a great start recently as the Chinook High School freshman harvested his first Antelope. Jacob was joined on the hunt by family friend Jake Scott. The two hunted the Hilldale Colony north of Havre.

Hunting season is in full swing and hunters young and old are searching for that memorable hunt. As we have done in the past the Journal is recognizing successful hunts by our local sportsman, focused primarily on our youth hunters.

These young hunters have taken full advantage of the Montana Fish Wildlife and Parks Apprentice program and have went on to have great success. This program allows young hunters to get in the field and harvest an animal under the watchful eye of an approved guardian.

Beau Henry, age 11, of Havre is the Grandson of Mike and Michele Farmer of Chinook and the son of Trevor and Julianne Henry of Havre. On Saturday, October 17, Beau, along with his brother Brody, Dad and Grandpa headed south of Chinook for their hunt.

Beau using a 6.5 Creedmore harvested a 4x4 Muley Buck. Beau was in a stand with his Dad Trevor, while his Grandpa and brother were in another. They spotted the Buck at about 75 yards, waited for it to turn broadsided, aimed lower left shoulder and delivered a perfect heart shot.

"I am thankful that I was able to harvest a nice buck my 2nd year in the apprentice program! It is nice to be able to help feed my family! The deer is really fatty so it should be good to eat," said an excited Beau. 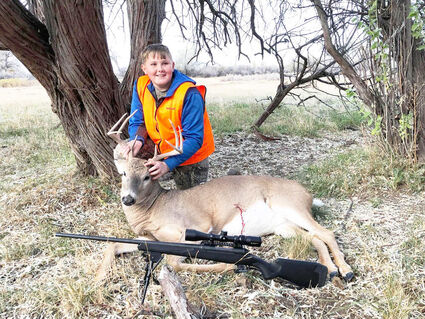 Beau Henry, had a successful hunt recently, harvesting this nice Muley. Beau's Dad Trevor, Grandpa Mike Farmer and brother Brody joined him on the hunt. Beau and Brody processed the deer into steaks and sausage right away and cleaned and mounted the horns.

Beau and his brother quickly processed the deer into steaks and sausage and Brody cleaned and mounted the horns.

Chinook's Jacob Metcalf, along with family friend Jake Scott were hunting recently on the Hilldale Road north of Havre. Jacob asked for and received permission to hunt from the Hilldale Colony.

They began their hunt with a lot of Coyotes being seen, but no Antelope. Soon the pair came across a lone buck, but with the wind and distance (320 yards), they decided to sneak in closer. Avoiding detection being the biggest task at hand.

Eventually they worked their way in to a distance of 212 yards and with a perfect shot. The Antelope traveled a short distance before Jacob was able to place his tag on the animal. The Antelope was Jacobs first and the horns measured 13"