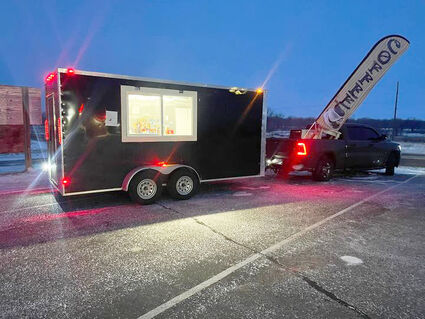 After deciding this past fall that they needed to examine their work schedules, Mason and Danielle Martin determined that reliable employment closer to home was in better alignment with their goals. That determination led to their establishing a business of their own. Martin Grind is a mobile coffee service that operates in the communities of Hays, Harlem, and Fort Belknap Agency.

In mid-October, the Martins purchased a black, eighteen foot A & R cargo trailer. With the help of Mason's dad, Gerald Martin, the pair began setting up the trailer. They not only installed a drive-thru window and a sink but remodeled the inside with shelving and a countertop to accommodate an espresso machine, syrups, coffee, and other supplies.

Using Facebook on November 25, the Martins announced that they would be opening soon. In a soft launch at the end of November, they began serving espresso drinks, Italian sodas, and Red Bull infusions from the Martin's Grocery parking lot in Hays. With every purchase, the consumer's name was entered into a drawing for a 50-inch television and a Kindle. Demand was such that the couple soon realized they would need a bigger machine.

"We started with a very small espresso machine that wasn't able to keep up with customers, so in early December, we bought a bigger one," Mason explained.

On December 2, they held a Grand Opening in Hays and on Friday, December 3, they changed location to the Casino Parking Lot on Fort Belknap.

About the coffee shop's schedule, Mason stated: "It's really exciting to see everyone in the morning and start their day off by being friendly. These two locations have always needed a good, consistent coffee place to go to. Our goal is to stay consistent for all customers."

Although currently in process, the couple hopes to standardize their hours of operation during the second week of January when they plan to be open from 7:00 a.m. until 4:00 p.m. Monday thru Friday. Accepting both cash and credit cards, the mobile coffee service will be in the Casino Parking Lot on Fort Belknap or the EZ Mart Parking Lot in Harlem every day except Wednesdays, when the trailer will be in Hays at Martin's Grocery.

In addition to their espresso drinks, Italian sodas, and Red Bull infusions, Martin Grind offers three signature drinks. Missouri Breaks is a coconut mocha prepared with coconut milk, Milk River Mud is a chocolate macchiato, and the Bear's Paw is a white chocolate and huckleberry latte. These are available as either hot or iced beverages and prepared from coffee beans that the Martins order from a supplier in Columbia Falls, Montana.

The couple reports serving holiday favorites, as well. Latte flavors like peppermint white mocha and raspberry mocha are common this time of year.

Even though additional food items are on the horizon, according to Mason, Martin Grind currently offers chocolate, blueberry, and banana nut muffins.

During the summertime, Mason has worked in road construction as a paving supervisor, a position which takes him away from his home in Hays, Montana. Danielle held a position as a dental hygienist and worked for Bullhook Dental in Havre for three years.

"The driving just wore her out," Mason claimed, "so we decided to go all-in on a business closer to home. You can follow us on Facebook, where you can find our menu and any specials that we will be running."

Whether Mason will return to his road construction job come summertime will depend largely on supply, demand, and the revenue generated by Martin Grind. "We'll just have to see how it all goes," Mason said. "Ideally, we'd like to have two shops going." 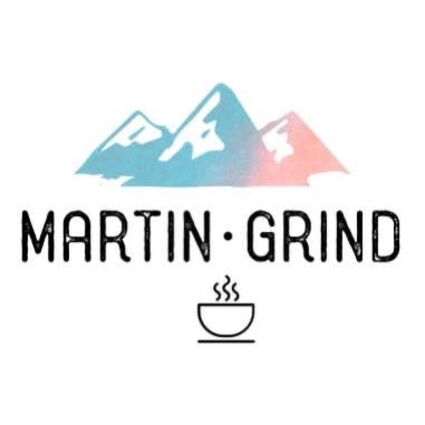 Winners of the prize drawings during their soft launch were Chandra Garcia, who won the Kindle; and Darren Black Wolf, who won the RCA Ultra HD Television.