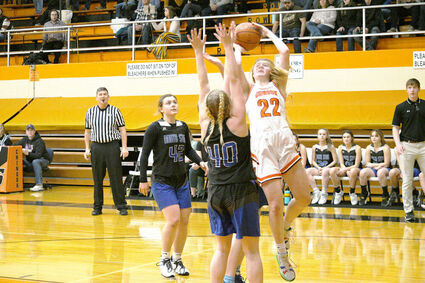 Chinook sophomore Hallie Neibauer scores inside Friday during first quarter action against the Knights. Neibauer finished with a game high 23 points in the win.

The Chinook Sugarbeeters were home Friday night as they welcomed the North Star Knights to town. The Knights and 'Beeters brought identical 4-1 conference marks into the tilt as they battle for a top seed come tournament time. The 'Beeters rode the ups and downs to a late surge that led to a 52-42 conference win over the Knights.

Saturday the 'Beeters faced another stiff test, this time they were on the road taking on the Longhorns in Fort Benton. Chinook and Fort Benton delivered their bests shots early on and both teams responded. After the break the Sugarbeeters broke through and some timely buckets and stellar defense led to a strong finish and a 41-29 win.

Chinook got things started Friday night in their typical fashion, good team defense a steady offensive attack and a solid all around team effort on the court. Junior Bree Swanson and freshman Alexus Seymour each connected from long range and sophomore Hallie Neibauer continued to attack opposing defenses scoring six first quarter points against the Knights.

Chinook took a slim 14-13 lead into the second quarter of action but the sense was they were in control of the action. Seymour hit another three and scored eight more before the half to keep the 'Beeter offense rolling. Neibauer added four more of her own to help Chinook build on its lead and take a 30-23 lead into the halftime locker room.

If there is one thing that the 'Beeters have struggled with early on it may be foul trouble. Chinook was forced to sit some players a bit in the third and the offense struggled a bit with continuity. The defensive effort remained strong, but the Knights were able to come back.

Swanson accounted for both of Chinook's field goals in the third quarter, both from beyond the arc. Sophomore Britton Elliot knocked down a pair from the charity stripe to account for all eight Chinook third quarter points.

The 'Beeters found themselves in a precarious position to start the fourth quarter, down on the scoreboard, 46-38.

Head Coach Mike Jones and his team put on their rally caps down the stretch and quickly regained control of the contest. Swanson connected on her fourth trifecta of the contest to get the rally started.

Elliot scored six points in the fourth to steady the offensive attack and Neibauer erupted for 13 in the quarter. The result was a dominate performance to close out a 62-52 come from behind win for the 'Beeters.

Neibauer finished with a game high 23 points. Neibauer knocked down 10-12 from the free throw line including her final ten of the contest. Swanson finished with 12 points, all from beyond the arc. Seymour scored 11 and Elliot finished with 10 in the win.

In Fort Benton Saturday the 'Beeters were flying high and set to add another check to the win column. Both offenses struggled early and not necessarily because of great defense. Chinook got four points from Seymour and a bucket from Neibauer to account for all the scoring early. Good news, the Longhorns managed just six as well.

Seymour added another three before the half and Elliot drained one from distance as well, but both offenses still struggled. Chinook managed to hold the Longhorns in check sending both teams to halftime even at 14-14.

The 'Beeters made some adjustments during the intermission and seemed to figure things out to start the third quarter.

Swanson evened the score at 20-20 with a long three and Neibauer gave the 'Beeters the lead moments later, knocking down a pair from the charity stripe. Swanson added another long ball as time wound down in the third to help Chinook open up a 27-20 lead heading into the fourth quarter.

Swanson closed out the contest with a couple more buckets while Seymour was a perfect four for four from the foul line as Chinook sealed a huge 41-29 conference win over the Longhorns.

Swanson, Neibauer and Seymour all finished with 11 points in a balanced 'Beeter attack. Elliot added five in the win.

Chinook improves to 6-1 in District 9C play and 8-2 overall setting up a huge showdown this weekend. The Sugarbeeters will host the Big Sandy Pioneers this Thursday as they look to complete the season sweep. 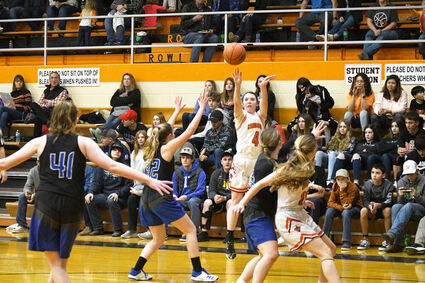 'Beeter junior Bree Swanson knocks down a fourth quarter three point bomb to help lead the 'Beeters to a 62-52 win over the Knights.

Saturday the Box Elder Bears will come to Chinook in a huge District 9C contest. Chinook held a lead early and Box Elder held on late in the teams first meeting back in December in the Bears Den. The 'Bears sit atop the District 9C with a 7-0 conference mark and a 9-1 overall record. The 'Beeters will look to hand the Bears their first conference setback.