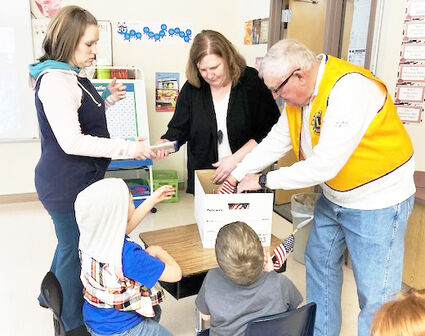 Meadowlark first grade teachers Mrs. Sheena Barber and Mrs. Tammy Edwards help Chinook Lion Richard Cronk hand out miniature desk top flags to first graders at Meadowlark Elementary in Chinook. It's a tradition to give the flags to students on or around Presidents Day. This year the flag giveaway coincided with the actual Presidents Day.

Lion Cronk asked the kids to stand and pledge allegiance to the flag. It was pretty clear this was not their first time saying the pledge. That went very well. Then the discussion turned to the history of the flags and what each star...