Sugarbeeters Double up Cascade 60-30, Season Ends with Losses to Roy/Winifred and Belt 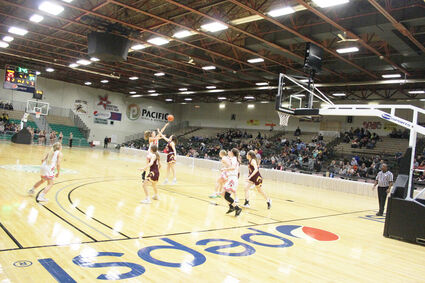 Chinook senior Allison Powell got a shot off against the Belt Huskies Saturday morning.

The (13-6) Chinook Sugarbeeters were plenty happy to be back in Great Falls this past weekend playing in the Northern C Divisional for the first time since 2016. The Sugarbeeters entered the tournament as the District 9C No. 2 and began play Thursday afternoon against the District 8C No. 1 Roy/Winifred Outlaws.

The 'Beeters struggled early and often in their tournament opener against the Outlaws. Chinook had been very successful for the bulk of the season and their growth on the court was noticeable. The 'Beeters however are still a very young team and the Outlaws took advantage of that inexperience. Roy/Winifred jumped out to a 12-0 lead before sophomore Hallie Neibauer connected from beyond the arc to get Chinook on the board.

The 'Beeters added a Swanson three point bomb in the second quarter but that was all the offense the 'Beeters could muster in trailing 23-6 at the half. The Outlaws continued to build on the lead throughout the second half in sealing a 55-23 win over the Sugarbeeters.

Neibauer scored seven points after the break to lead the 'Beeters with 10 points. Swanson added a long two point bucket and finished with five in the contest. The 'Beeters got contributions from the bench as sophomore Britton Elliot also connected from distance. With the loss the 'Beeters found themselves in a Loser Out contest Friday morning against the Cascade Badgers, the No. 3 out of the District 10C.

Friday morning the 'Beeters found themselves trailing early to the Cascade Badgers in a loser out contest. Swanson scored five points early on to keep Chinook close. Senior Allison Powell converted an offensive rebound for a bucket, and freshman Alexus Seymour closed out the first quarter with another score off an offensive rebound to help the Sugarbeeters take a 15-10 lead into the second quarter.

Swanson continued her strong play with a long two to begin the second quarter and then added a three point play moments later to extend the 'Beeter lead to 20-10 with 7:12 left before the half.

The 'Beeters offense was rolling while their defense suffocated the Badger attack. Seymour added a mid range jumper, Neibauer converted a pair from the charity stripe and then knocked down a corner three to give Chinook a 27-10 lead. Elliot then capped off a 24-0 'Beeter run by draining a long three off a nice inbound pass from Swanson.

The Badgers scored seven straight before the break but Powell closed out the half with another strong offensive rebound, drawing the foul in the process. Powell calmly knocked down both free throws to send the teams to the halftime locker room with Chinook on top 32-17.

Making sure the Badgers weren't going to mount any sort of second half comeback the 'Beeters found their mark from distance. Neibauer, Seymour and sophomore Mya Berreth all drained long balls from beyond the arc to push the 'Beeter lead to 43-19 early in the third quarter.

Neibauer then scored in the paint and Swanson added a three ball of her own to give the Sugarbeeters a 49-20 advantage heading into the fourth quarter. The 'Beeters controlled the contest down the stretch and earned a comfortable 60-30 win over the Badgers. Neibauer tallied 17 points and nine rebounds for the 'Beeters in the win. Swanson added 13 points, six rebounds and three assists to the 'Beeter effort. Junior Torin Cecrle dished out six assists to lead the 'Beeters.

Saturday morning the Sugarbeeters were back on the court to take on the Belt Huskies in another loser out contest. In a low scoring first half the 'Beeters controlled the tempo early on. Swanson knocked down a long three off a nice kick out pass from Neibauer and Elliot finished at the rim for a 9-3 lead late in the first quarter.

Seymour knocked down a triple in the second, junior Anna Terry and Swanson added easy fast break layups and Powell turned another offensive rebound into points to help Chinook take a 18-15 halftime lead. Berreth scored midway through the third quarter to put Chinook up five 24-19.

The Huskies would battle back and the Sugarbeeters would struggle mightily down the stretch. Belt took their first lead of the contest 25-24 with 2:47 left in the third quarter. The 'Beeters couldn't buy a basket down the stretch while the Huskies built momentum. Chinook got a free throw from Neibauer to end the third quarter but the Huskies were in the midst of a 22-1 run that saw them take a 41-25 lead over the 'Beeters with 3:26 left in the game. 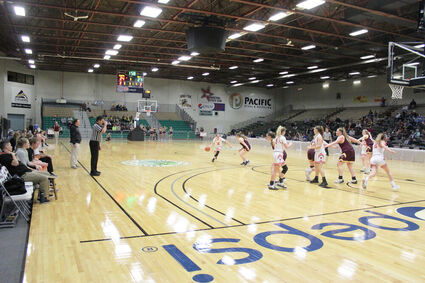 Chinook would see their season end moments later with a 46-30 loss to the Huskies. Seymour and Swanson each finished with seven points while Neibauer scored five and grabbed 10 rebounds. Powell added five points and seven boards in her final game for the 'Beeters.