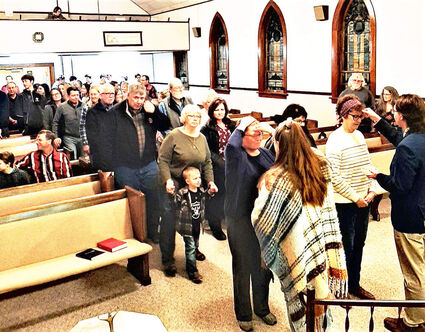 Congregants in a joint Ash Wednesday service held the American Lutheran Church in Chinook are shown receiving the 'imposition of ashes' last week. The service was sponsored by the five congregations from three towns working toward more shared ministries. YAV's Emma Kate Lander and Brendan Stump are shown imposing the ashes on congregants foreheads.

The "five congregations from three towns" recently celebrated a joint service for Ash Wednesday. Over the years some of the congregations have gathered to celebrate together. This is the first Easter season assembling of the new group made up of three denominations from Chinook, Harlem and Havre. The success of their first joint Christmas Eve service this past December encouraged the group to bring the congregations together for the start of Lent and other services leading to this year's Easter celebration.

Ash Wednesday dates back to the middle ages

The rituals surrounding Ash Wednesday, according to most scholars, came about during the middle ages. The ceremony was likely inspired by actions of the ancients in the Bible who would cover themselves in ashes as a sign of repentance and a public sign of a desire to change.

The modern ritual of imposing ashes at the beginning of Lent is a sign of a desire by faith communities to repent, contemplate their shortcomings and begin a process of spiritual healing. Unlike Christmas and Easter's joyous services that celebrate Christ's birth and resurrection, Ash Wednesday services are traditionally somber as congregants contemplate Christ's death.

Rev. Jack Mattingly, who is pastor of the Chinook United Methodist church and the Harlem Yoked Parish (a combination of the Presbyterian and Methodist churches in Harlem), led this year's Ash Wednesday service. Despite having recently tested positive for COVID, Mattingly was able to preach the message while keeping distant from the congregation. Under his direction current YAV's (Young Adult Volunteers) Brendan Stump and Emma Kate Lander imposed ashes and served communion to the gathered congregants The joint service was held at the American Lutheran Church in Chinook.

Teens who participate in JUMP, a Chinook-based interdenominational youth group, made up a sizeable portion of the congregants for the Ash Wednesday service. Reps from the Harlem Yoked Parish opted not to travel due to the weather. Chinook and Havre congregations were all represented.

Betty Lou Stender, of rural Chinook, said she always enjoys getting together with other congregations because it creates "a real feeling of a Christian community. I also enjoy the services at my own church but these larger gatherings are special for all of us to worship together."

The YAV's were quite enthusiastic about their opportunity to be a direct part of the Ash Wednesday service by serving communion and imposing ashes. Emma Kate Lander, from Maryland, said she had done 'healing anointing with oil' but had never imposed ashes. YAV Brendan Stump, from West Virginia explained, "I've done imposition of ashes in a slightly different way, through "Ashes to Go." "Ashes to Go" is an organization that takes ashes to people "where they are on Ash Wednesday" at airports, commuter train stations and mall parking lots. Brendan said he'd been with the group to the entrances of both a shopping mall and a college dining hall. 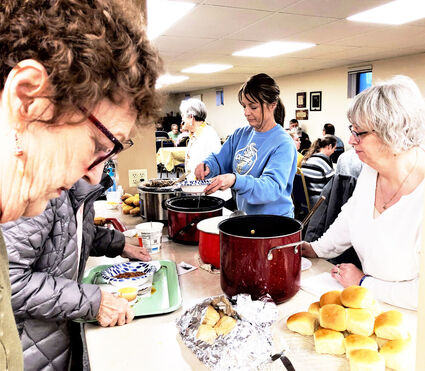 Members of the Chinook American Lutheran Church (right) serve soup to guests at the first joint Lenten Soup supper of the five congregations from three towns. More than 50 people attended the first combined Lenten Soup meal. Diners then watched the first episode of "The Chosen," a made for TV series about the life of Christ as seen through the eyes of his disciples.

During the six Wednesdays of Lent the five congregations (one Lutheran (ELCA), one United Methodist, two Presbyterian and the Yoked Parish from Harlem-Methodist and Presbyterian), will be hosting Lenten Soup Suppers at the American Lutheran Church (across the street from the high school) in Chinook. The first supper was well received and attended by 50+ people, young and old.

The suppers begin at 6pm, with soups prepared by an assigned congregation each week, followed by a showing of all eight episodes from the first season of the TV series "The Chosen." The series is based on the life and ministry of Christ. Totally funded by donations from interested viewers, the series is now starting its third year of production. There is no charge and all are welcome to enjoy soup, fellowship and the showing of all eight first-season episodes of "The Chosen."