Easter Egg Hunts Scheduled, But Why Does a Bunny Bring Eggs 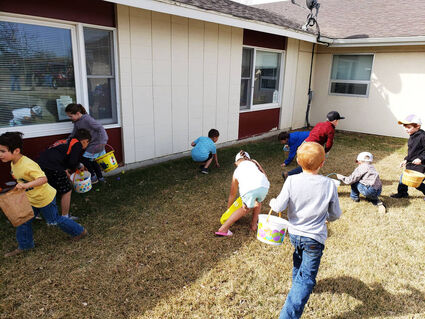 Five and six year olds race around to gather as many eggs as they can at the 2021 Sweet Home Easter Egg Hunt. The tradition continues this Friday at 2:00 p.m. for children Ages 1-10 years. JUMP and the Chinook Alliance Church will be holding an Easter Egg Hunt on Saturday at the Sweet Park from 10-Noon for Preschool to Sixth Grade students.

Easter is an incredibly significant moment in all of Christianity and regardless of whether you and your family are practicing members of Faith, we are all aware of the significance and meaning of the Holiday. This weekend many will celebrate the Holiday as it was intended and celebrate the resurrection of the Lord Jesus Christ Our Savior. In addition, the weekend marks the start of spring break or a post winter getaway for those who may not be religious. Either way the weekend will be focused on time together, family, friends and a fresh start with spring and summer on the way.

The Holiday also will provide plenty of opportunity for youngsters to take the spotlight once again in some family and community fun by taking part in an Easter Egg hunt. Locally there will be several hunts for kids to take part of in addition to ones set up at family gatherings. The Sweet Home in Chinook will be hosting their Annual Easter Egg Hunt on Friday, April 15 at 2:00 p.m. with children ages 1-10 participating. The Chinook Alliance Church along with the JUMP Christian Youth Group will hold their Easter Egg Hunt, Saturday, April 16, from 10-Noon at the Sweet Park in Chinook with Preschool through Sixth Grade participating.

Easter Egg Hunts are always a good time for all involved, regardless of where they are held, but how did the practice become such a staple of the holiday? Why an egg, and why are they brought by an Easter Bunny? In the past I have researched and shared my findings on such holidays and how they came to be, like Memorial Day, Labor Day and even Mother's Day and oftentimes their start is genuine in origin. Since the start of the 1900's commercialization of the holidays has become the norm and not the exception. Santa Claus as we know it today is widely associated with a Coca-Cola Ad campaign. Leprechauns and Four-Leaf Clovers for Saint Patrick's Day, Cupid for Valentine's Day, and Witches and Ghosts for Halloween are sure signs of great marketing schemes. So why a Bunny that lays eggs for the most sacred of Christian Holidays?

The origin of the Easter Bunny actually can be traced back to the early 1700's if you follow German story-lines, others suggest it can be traced back thousands of years to early pagan traditions. The festival of Eostre honored the goddess of fertility and spring and the symbol associated was in fact a rabbit. Rabbits were often used as symbols of fertility due to their high reproduction rates. Early Christian celebrations often combined the early pagan celebrations into their religious celebration to promote growth.

Fast forward to 1700 Germany with many of its citizens immigrating to Pennsylvania who brought with them the Old Country tradition of Oschter Haws a rabbit who would lay colorful eggs as gifts for children who were good. In hopes of receiving an egg, young children built nests to increase their chance of receiving an egg. As the years went by the tradition evolved to include candies and chocolates as well as gifts.

The Christian perspective suggests the eggs represent the resurrection of Jesus and religious scholars hint that they believe the tradition dates to the early 1300's. Eggs were considered off limits during the Lentin season and people started decorating them as the fasting period came to an end. To glorify the egg with decoration was a way of making the celebratory Easter feast even bigger.

The delivery of the Easter Egg varies widely from country to country, obviously the United States and Canada have the Bunny, but in Australia it's Easter Bilby, a nefarious marsupial. Switzerland eggs are delivered via the Easter Cuckoo and back in Germany the Easter Fox delivers the goods, or in some cases the Easter Rooster. Regardless eggs get delivered and children get to have fun and families get together to celebrate family. Isn't that the best part of the weekend anyway?

So whether you have a Bunny, Fox, Rooster, Bilby or Cuckoo deliver the goods to the children, enjoy the time together and the smiles on the children's faces. Happy Easter Blaine County, from all of us at the Blaine County Journal!