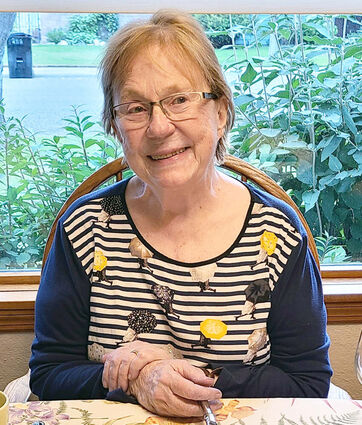 Joanne Braun passed away the morning of April 17, 2022, at the Billings Clinic Hospital in Billings, Montana.

Joanne Braun was born in Havre, Montana, as Joanne Marie Graham on October 22, 1940. She was the third of Kelso "Curly" and Julia Graham's seven children.

After graduating from Chinook High School in 1958, Joanne married Rudy Arriola that same year and had four children: Tom Arriola of Phoenix, Arizona, Dan (Deb) Arriola of Chinook, Montana, Kathy Arriola-Shaffer of Billings, Montana, and Margaret Wakeham of Salt Lake City, Utah. She later divorced and raised the children on her own.

She pursued a career in healthcare, working at Northern Montana Hospital in Havre, Montana as an inhalation therapist. She later served Blaine County, Montana as the state's first female paramedic, sometimes arriving on the scene alone, driving the ambulance and attending to the patient.

Joanne worked as the police dispatcher for the city of Chinook, Montana. As a single mother, this was useful. At any time of day or night, an officer could tell her exactly what all four of her children were up to.

Joanne also worked for Montana Power, first in Havre, Montana and later transferring to Butte, Montana. She retired from Montana Power in 2000.

In retirement, Joanne was an avid bridge player and achieved the status of Silver Life Master. Throughout her life, she loved to read, work jigsaw puzzles and play cards of all kinds.

Joanne married Dr. Bennett Braun in July 2012 in the Montana mountains, surrounded by friends and family. The marriage began another adventure for Joanne. With her new husband at her side, she learned to open water scuba dive, hunt, and go downhill skiing.

Memorial services will be held in Butte, at the Holy Spirit Catholic Church, on Saturday May 14, 2022 at 11 AM, with a reception following.