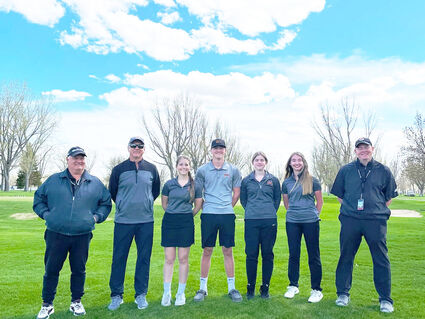 The Chinook Golf Team was in Sidney May 16-18 for the Montana Class C State Boys and Girls Golf Tournament. Having played the course a week earlier in inclement weather at the Eastern C Divisional The four 'Beeter Golfers that qualified were anxious to get another shot. Senior Braden Eoff represented the Boys team while senior Shay Hauer, junior Morgan Friede and sophomore Hallie Kralich hit the links for the girls. Freshman Cayla Hofer also qualified for the State C, but due to unforeseen circumstance was not able to compete.

Heading into the State C Meet the team was optimistic about the tournament and excited to play the course in some better conditions. A practice round was held on Monday that gave the team a better understanding and feel for the course. The State C Girls and Boys Golf Tournament began with Round 1 on Tuesday, May 17, and for the most part saw lowers scores across the board. The wind picked up considerably for round two on Wednesday, May 18 and the scores reflected that.

Senior Shay Hauer was the story of the tournament with the best two rounds of her playing career coming at her very first State Meet. Hauer gained entry to the Girls State C Tournament as a result of the 'Beeters qualifying as a team. Chinook finished 5th at the Eastern C Divisional gaining entry into the state tournament. Friede, Kralich and Hofer provided the scores used to generate the team score and also had qualifying individual scores. A team consists of four players while scoring the top three and

Hauer was the fourth.

Hauer on the other hand signed her scorecard for a 141 at the Eastern C Divisional the week prior. Then in her final tournament of her senior season, and at the State C no less, Hauer put it all together.

In her opening round Tuesday she took a whopping 34 strokes off her Divisional round and posted a 107. Round two, facing the high winds, Hauer fired a 111 to finish 18th in the field just three spots from medaling and earning All-State Honors. It was a remarkable performance that catapulted her to the top of her team standings.

Hauer was overwhelmed by the experience and tried to put everything in perspective, "Going into state I didn't expect to place or really even shoot very good. I just thought I'd go out there, do my best, and try to have some fun. I ended up getting a birdie and shot the best round of my career so far which was a 107."

During her opening round she had a sense early on that things were a bit different, "Before shooting that birdie, I was playing bogie golf, and for some people that's not very good golf, but for me that was really good. After the first couple holes something just clicked and I had a new confidence in my game. My swings were going straight and far and my putts were falling in on the first one. It felt really good."

Having moved into position to contend for a Medal (Top 15), Hauer had some nervousness, "The second day I definitely felt a little more pressure that I put on myself because I realized I did want to place. My golf game went down by four strokes but the weather was also way windier than the day before. Once I got over the weather I got back on track and started making par again."

Hauer didn't have a lot of confidence heading into the state tournament, "I didn't think I'd do very good at state after playing so bad at divisionals. So getting 18th made me feel really awesome! I was also a little upset because I was only three strokes away from a medal and the difference could've been one good chip or one straight drive. Overall I'm really happy with the outcome and I played the best golf I have all year."

Looking back, her fondest memory of her high school golf career was clearly her last tournament, "For me personally, the highlight was getting my first birdie and shooting a 107. Before state, I hadn't shot under a 120. As a team, hanging out with everyone and smack talking with our coaches was a great highlight. Definitely going to remember this season and my team. They've helped me grow as a golfer and a person so a big thanks to my coaches and my teammates."

Seymour commented on the conditions his team faced, "The weather the first day to the second day was way different. The greens were a little slower, had a little rain during the first round. The second day the wind really picked up and the greens were a little faster. We had them practicing in the wind all year and I think that really helped the kids, up until they got to the green. Then the wind with the slope really seemed to affect their putts more."

As far as the season went and how everything concluded Seymour has a positive outlook, "I think they all enjoyed themselves, enjoyed their season. Golf is a very difficult game to play, very humbling, you can't be perfect at it. You're always playing against yourself. The more a player can learn to accept that fact, the more the game of golf can be something an individual can enjoy the rest of their life."