In another example of the Bear Paw Bowman's appreciation to Frank and Bettie, a crew is getting together to paint this Barn and bring it back to life. In addition winter weather has done quit a job on the attached corral and they plan on fixing the fence there as well.

The 23rd Annual Barber Ranch 2 Day Archery Shoot is set for this Saturday and Sunday. Located in the Hungry Hollow near Lloyd Montana, Frank and Bettie Barber have been spectacular host for the two-day event for more than two decades. The Bear Paw Bowmen Archery Club has worked hand in hand with the Barbers in building the Archery Shoot into one of the premiere events around. "Everybody is really exited! We are expecting a huge Canadian Turnout since they haven't been able to come the past two years," said Bettie. "The first camper actually showed up on Saturday (June 11) a full week before the scheduled start." Hundreds of archers and their families from all over the United States and parts of Canada, from the novice to the very experienced will be on hand for the shoot. It's quite a challenge to put on such a spectacular event but the Barbers and the Bearpaw Bowmen always seem to get it done.

The Archery Shoot includes Freestyle, Unlimited, Limited, Barebow, Recurve, Long Bow and AC/DC. The AC/DC shoot compound one day at two courses and traditional the other two for a total of four courses that include some rough terrain. Once again, a live and silent auction will be held as well as plenty of raffles and door prizes. Following the conclusion of the Archery Shoot, scheduled events for Saturday will include the Vicky Thomas Memorial Cub/Chick Challenge, followed by the Water Shoot.

All this good fun goes to support a good cause. "For several years, the Bear Paw Bowman, prior to announcing the raffle winners, held a little ceremony to maybe give us a gift or thank us for hosting the shoot. Well along the way somebody, I don't know who, came up with an idea to start a scholarship in our honor to Northern in an agriculture field," said Bettie. The Archery Shoot helps support the Frank and Bettie Barber Scholarship fund at Montana State University-Northern in Havre.

The scholarship fund has become something iconic, "One of the fun things at the bow shoot is the scholarship auction. One year the club purchased a 3-foot-tall carved bear. The first year the friends who bought it decided he would be a traveling bear and that each year whoever bought him would 'add' something to him. Over the years he was given a archer's cap, a bandanna, a quiver, arrows and so on and so on. Our fun-loving friends to the north, the Canadians bought him one year and oh happy days," exclaimed Bettie

The Bear became known as Bruno Barber and has been to every shoot since and was even given a Canadian passport. Bettie recalls one memory specifically, "One time Bruno had a bit too much of Canadian ale and ended up with a Canadian Flag tattooed on his bum. But even more shocking, he returned to the United States with a cub, who was lovingly named Canuck." Since then, auction winners of Bruno and Canuck have taken a trip to Hawaii but since Bruno was so large only Canuck could make the trip. Bruno continues to travel from friend to friend raising money to help deserving young people continue their education at Northern. 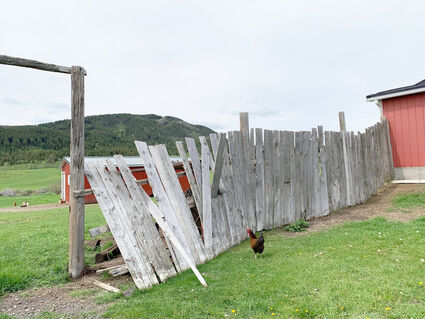 In another example of the Bear Paw Bowman's appreciation to Frank and Bettie, a crew is getting together to paint this Barn and bring it back to life. In addition winter weather has done quit a job on the attached corral and they plan on fixing the fence there as well.

The criterion for winning the scholarship is pretty basic to allow for many students interested in the Ag field to be eligible. After the applications are received the College presents a list to Frank and Bettie for them to choose the winner. This year's winner is Tia Stahl. "She's such a neat kid, she sent us a wonderful thank you after she learned she had won. Tia said she will do her very best to not only represent the school but the next generation of farmers and ranchers. She was very grateful for the award."

In another gesture of gratitude by the Bear Paw Bowmen to Frank and Bettie each year a crew is put together to do some work around the Barber Ranch. Last year a dedicated group of volunteers took on the task of clearing an old cemetery that had been completely grown over. The task was daunting and unless you knew it was there no one would have suspected the location was anything but overgrown bushes and weeds. The group completely cleaned up the area and reset all the headstones returning the cemetery to a righteous condition.

This year's project includes painting an old barn and fixing up the attached corral. The winter weather has certainly taken its toll on the structure and the Bowmen will do their part in making it shine once again. "It's such a great connection for everyone, it's what makes the world go round! We let them have the Archery Shoot, they help us maintain the Ranch," concluded Bettie.