The Chinook Sugarbeeter Football team took 25 players down to Bozeman this past week to attend a football camp at Montana State University. The 'Beeters were able to field a Varsity and Junior Varsity squad during the camp and overall Head Coach Mike Jones was pleased with the teams effort.

When school concludes in May, coaches and student athletes almost immediately turn their attention to the next school year and getting ready for another year of high school sports. The Montana High School Association allows coaches to work with their respective teams, attend camps, tournaments and hold open gyms during the month of June.

June has become a busy time for parents, ferrying their child all over the state to be a part of these functions. Coaches are doing their best to work with other coaches to share gym time and accommodate the each others schedule.

It's not like during the school year where the sports are broken down into seasons and the school is transporting the kids. Basketball, football, volleyball and wrestling are all doing their best to get their kids up to speed for the upcoming school year. Some coaches guide multiple teams, say football and basketball, making scheduling less of an issue but also limiting down time to nearly nothing.

The Blaine County Journal makes every effort to follow our local high school sports teams during the summer months as they put in the extra work to prepare for the upcoming season.

The Montana State University - Northern Football team held a day camp in May that was well attended by several Blaine county athletes from Chinook, Harlem and Turner. Across the state basketball tournaments are held every weekend and the Lights and Skylights at MSU-Northern will conduct their individual and team camps this month. Summer leagues are also available for individual athletes and teams at MSU-Northern.

This past week the Chinook Sugarbeeter Football team was in Bozeman at the Montana State University Bobcat Football Camp. Head Coach Mike Jones and 25 players were in Bozeman Monday through Wednesday going through a number of drills, team activities and general learning sessions.

"We had a great turnout. We were able to put together both varsity and junior varsity teams to compete. The varsity had some good competition with 11 teams in the field all together. The junior varsity got to get some quality work in as well, competing with four other squads at the camp," said Jones.

With any team, graduation always presents next years teams with various holes to fill and these summer camps and team activities are a great way for coaches and players alike to get a feel for what practice will look like when fall practice begins in August. Leadership is always something a coach will look for early on. Who is going to fill that roll, lead the team when the season comes around and help get the team where it needs to be.

Senior Tyler Schoen had a great junior season on the football field for the 'Beeters and looks primed to have an even better senior campaign. "Tyler had a great camp. He really stepped up, led the team on the field and got the attention of plenty of coaches watching the team play," said Jones.

These summer camps and team activities such as 'open gyms' also give the coaching staff an opportunity to see what the upcoming teams strengths and weakness may be and make roster adjustments to best suit the team. "We had a good mix of kids out, some of the younger ones were able to step up and fill spots to allow us to compete against the other teams," added Jones.

So far, so good, "I'm pleased with the effort our kids are showing. We moved some kids around to different spots than they played before, made some adjustments to be able to fill a hole here and there," said Jones. "We were able to get some new offensive installs put in and the defense is coming together. Kids are working hard and we'll get there."

June has also seen many local runners of all ages take part in various Road Races. 5K, Half-Marathons and Full Marathons are quit common during the summer months and are generally open to runners of all age groups. This past Saturday in Helena the Annual Governors Cup races were held. 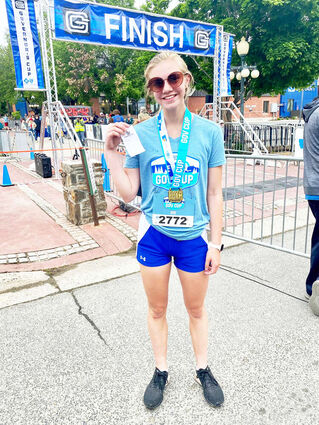 Chinook senior Anna Terry turned in a first rate effort at the Governors Cup 5K in Helena finishing 1st in her age group (13-19), 3rd in the Womens Division and 19th overall out of 783 runners.

Chinook senior Anna Terry, fresh off an outstanding effort the previous week at the Bear Paw Half Marathon, was in Helena to run the 5K race. Terry was superb, winning the 13-19 girls age group with a time of 22:19.06. Terry finished 3rd overall in the Womans division out of 524 runners. Her time was the 19th best in the entire field, men and women, out of 783 runners.

The Big Sky State Games take place in July and many local athletes will head to Billings to compete. Local Volleyball and Basketball teams have competed in the past. In addition individual athletes have taken part in various track and field events at the state games as well.

Football and basketball are primarily the focus of June camps and team activities but Volleyball has its time in the summer as well. Team and Individual camps have generally been held in late July or early August just before the start of practice for the new year.