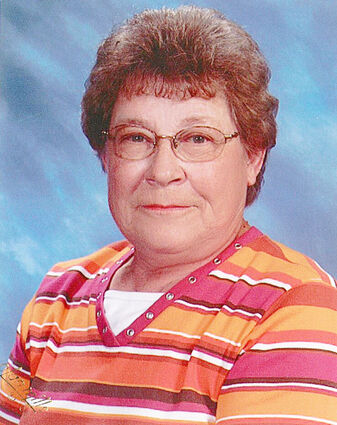 Betty Lou Stender, surrounded by family members, passed away peacefully in her home to a long battle with cancer on Monday, September 26, 2022.

Her life began with the aid of a midwife in a small rural log cabin in Gebo, WY on April 2, 1936 to Gene and Natalie Sherman, being the last of their four children. In 1937 Gene's work with the Texaco Company moved the family to a modest dwelling in Cut Bank, MT. Despite the Great Depression era and few material pleasures, Betty Lou grew up in a loving close knit family atmosphere. She would carry the value of family throughout her life. The family spent numerous weekends camping in Glacier National Park and vacationing at Swan Lake.

In 1951 another job transfer with the Texaco Company moved her to Chinook, MT during her sophomore year in high school. Betty Lou, being very outgoing, quickly became involved in many activities including cheerleading, Student Council, Drama club and Junior/Senior school plays. During this time she met and dated her future husband, Jon Barber. Upon graduation she returned to Thermopolis, WY to live with her aunt supporting herself working in the County Clerk's office at the city Court House. Jon was then serving as a US Marine stationed in North Korea. He returned to Chinook on leave during the summer of 1954. It was on June 19 of that year that she and Jon were engaged. Jon returned to Twentynine Palms, CA to finish out his three-year term returning to the family ranch in May 1955. The two were married in Thermopolis on October 16, 1955 spending their honeymoon in Black Hills, SD. They returned to the Barber cattle ranch located in the Bears Paw Mountains near Lloyd, MT. Here Jon and Betty Lou spent the next 36.5 years raising their three children (Joni, Bill & Kathi), watching them marry and bear eight grandchildren. Betty adapted very well to ranch life, working hard and instilling in her three children her positivity, hard work ethic, and love of life. Unfortunately, Jon lost his life to cancer in May 1992. Betty Lou provided the unconditional self-sacrificing care so characteristic of her compassion and generosity.

In October 1992 Betty Lou moved to Chinook. Unbeknownst to many, her fear of the dark and of being alone prompted this move. The following year she began dating Jerry Stender, a long time family friend. They were married in Reno, NV on February 25, 1994. Returning to Jerry's place, Sweet Water Ranch south of Chinook, they built a new home and began their life of 28.5 years together. Their life of companionship provided many joyous adventures and travels. Jerry's love of draft horses took them on several trips to Waverly, IA. On the way Betty Lou was introduced to Minnesota where Jerry grew up. They made various trips to Canada, Nevada, Washington, and Arizona. In 1998 they took a cruise to Alaska.

It was early in 1998 that Betty Lou began her long battle with cancer. Throughout the next 24 years she would heroically fight through the surgeries, the radiation, and the chemotherapies with a "take each day as it comes" attitude, never complaining. Along the way she would be a great source of comfort for others who were experiencing cancer, especially her daughter-in-law, Cheryl Barber. Together they participated in the "Relay For Life" events in the local communities. Another effort Betty Lou poured her heart into in support of cancer relief was the spring daffodil campaign. Dozens were up built by her positive zeal and enthusiasm, along with her contagious, warm, radiant smile as she delivered their daffodil orders.

Other activities she enjoyed were bowling, supporting the 4th of July races, playing bridge, staying in touch via FaceBook, and following her grand and great grandchildren in their various school and athletic events. Referred to as Gramma B, she was one of their greatest fans. When her daughter, Joni, moved to Maryland, Betty Lou visited some sites she dreamed she would never see. Two specific highlights were seeing the Statue of Liberty and Niagara Falls.

One very important area of Betty Lou's life was her faith. She was very active in the Presbyterian Church being a session elder, a member of the Presbyterian Women, treasurer, and an encouraging supporter of the Young Adult Volunteer (YAV) groups. Betty Lou had a knack at remembering important dates in the lives of others. She would never forget to send out a card of encouragement which dubbed her with the title "the sunshine lady."

Despite her trials and tribulations Betty Lou would always say "You just gotta get on with life". Her confident, ever repeated phrase 'faith and determination' never allowed her to think that the cancer would conquer or cause her to give in. She fought with dignity and strength to the very end.

She will always be remembered as a dedicated, loyal, self-sacrificing wife; a loved, cherished, and respected mother; a wise sounding board for her grandchildren; and a nurturing great grandmother. If one were to have asked Betty Lou what her purpose in life may have been, she would have responded "I think I was put here to be a caregiver." She fulfilled that role beautifully, in a way all can imitate.

Arrangements are being provided by Wilderness Funeral Home. Funeral services will be held Thursday, October 6, 2022 at 3:30pm in the Chinook High School Auditorium. Following burial at the Kuper Memorial Cemetery a reception will be held at the Eagles Club located at 305 Indiana St, Chinook, MT. Donations may be made to the Sweet Memorial Nursing Home located at 125 Airport Rd, Chinook, MT or the organization of choice.