'Beeters 12-0 After Picking up Wins over Hays/Lodge Pole, Big Sandy and Box Elder 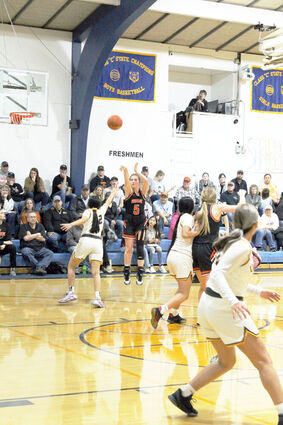 Sophomore Alexus Seymour knocks down one of her four three point bombs in a 27 point effort Saturday against Box Elder.

The Chinook Sugarbeeters continued their path through the schedule in dominate fashion. They began the week on Tuesday playing Hays in a makeup game postponed by weather in December. The 'Beeters topped the Thunderbirds 57-28. Thursday the 'Beeters defeated the Big Sandy Pioneers at home 71-40. Chinook closed out the week in Box Elder with a 59-43 win over the Bears.

Tuesday in Hays the 'Beeters and the Thunderbirds found themselves in a defensive tussle early on. Chinook got a three point bucket and five points from sophomore Alexus Seymour in a nine point opening quarter. The Thunderbirds...