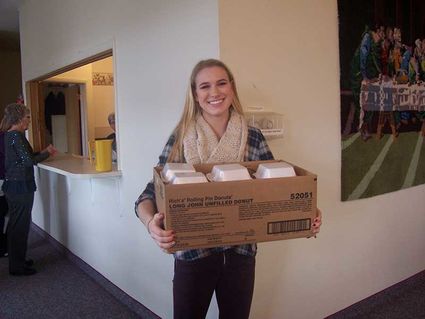 Sierra Swank leaves Wallner Hall with a load of lunches to be delivered during the Chinook United Methodist's Salisbury steak dinner.

An unusually mild winter weekend brought sizeable numbers of shoppers to the first weekend of local holiday bazaars around Blaine County. Some bazaar organizers, in the past, believed good weather tended to cause shoppers to head out of town for their shopping but that wasn't the case this year. All three first-round bazaars enjoyed a good turnout as shoppers got into the holiday spirit.

Historically, charitable bazaars in the United States date back to the early 1800's, as women's groups used the events to raise money to support religious organizations as well as political movements-like s...