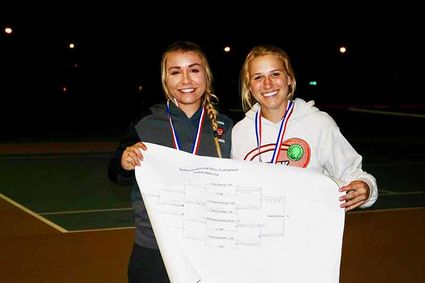 The Chinook Sugarbeeter Doubles tandem of senior Megan Pruttis, left and senior Sierra Swank, right were champions of the Northern B/C Divisional Tennis Meet and will take a number one seed into the State Tournament this week in Great Falls. The Tournament begins play on Thursday and concludes with championship matches on Saturday

The final tally might be closer than in years past but the Chinook Sugarbeeter Tennis team is again Champions of the Northern B/C Divisional.

Chinook finished with 38 points to edge out Chester/Joplin-Inverness (36) and Harlem 15.

The Sugarbeeters captured the Doubles Championship and had a second place finish in the singles bracket and will send four to the State B/C in Great Falls this weekend.

The Harlem Wildcats will send two to the state meet after collecting a second place finish in the Doubles tournament.

Seniors Megan Pruttis and Sierra Swank entered the tournament as the top seed a...