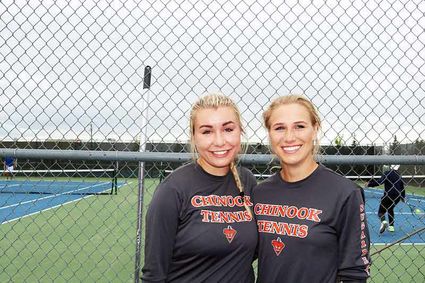 The Chinook Sugarbeeter Doubles team of senior Megan Pruttis, left and senior Sierra Swank, right earned a second place finish at the State B/C Tennis Tournament last weekend in Great Falls the duo earned All State recognition for the second year in a row, having finished third a season ago.

The Chinook Sugarbeeters again made some noise at the State B/C Tennis Tournament in Great Falls last weekend. The Doubles Team of senior Sierra Swank and senior Megan Pruttis looked to improve on their third place finish from a season ago and did one better finishing second at this years tournament. The girls opened with a bye after earning the Northern B/C top seed at the Divisional Tournament the week prior. In their first match they defeated the Widhelm/Bloom team from Simms 6-0, 6-2 to advance to the quarterfinals. The girls then topped Cummings/Groff from Granite in straight sets 6-0, 6-2 to advance to the semifinals.

With a birth in the championship match Swank and Pruttis easily defeated the duo from Cut Bank 6-1, 6-1 to advance to the final. The girls face a familiar duo from From Fort Benton, who happened to be playing some really good tennis and after a opening set battle went the other way 7-5, the 'Beeter tandem was defeated 6-1 in the second to finish second at the State Tournament.

"Placing at state this year was such an honor. It may not have been first place but Sierra and I worked hard and played our best," stated Pruttis. "Last year we fell just short of making it to the championship

and we ended up taking third. We were super excited to have won our semi finals match this year and get the chance to compete for the championship," added Pruttis.

After all was said and done Pruttis reflected on the season, "I couldn't be more proud of what we have accomplished not just this year but since the first day of practice freshman year.

The Sugarbeeters also were represented at the State B/C in the singles bracket by senior Jamie Roth and freshman Lily Surber. Both played very hard and Roth picked up a win in her second match 6-0, 6-2.