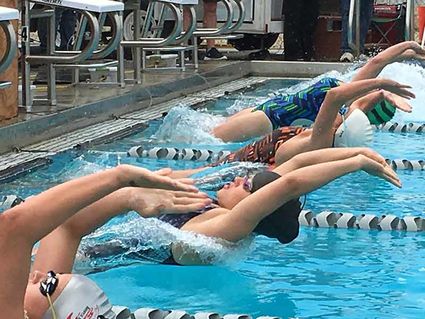 Britton Elliot, middle gets off to a great start in winning the 11-12 girls 50 Meter Backstroke in Chester on Sunday.

The Chinook Lions and Harlem swim teams are at the midway point of the summer swim season having completed four meets and with Divisionals just four weeks away.

Both teams were in Chester this past weekend while also having a few swimmers traveling east to Plentywood.

Chester is a western division meet which provided the teams a chance to compete against swimmers they don't normally see week to week. Chinook placed third this past weekend despite having less than half their team compete.

Harlem's Andrew Rasmussen won his fourth straight High Point this past weekend in Plentywood while also...