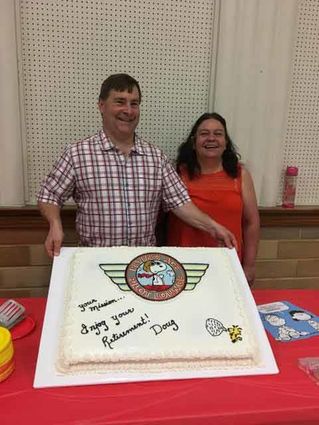 Doug and Carmaine Hayes share a laugh with colleagues at a retirement reception held for Doug in May. He retired after 33 years of teaching, 25 of those years in Chinook. The Snoopy-themed cake recognized Doug's long time fascination with the antics and philosophy of the "Peanuts" comic strip's characters, especially the beloved beagle, Snoopy.

Doug Hayes said his good-byes to Chinook School system colleagues at a retirement gathering at the end of school in May, then left immediately to lead a group to Washington, DC. Hayes started his teaching career in Froid, Montana, then joined the Chinook system in the fall of 1993. At retirement his career spanned a third of a century. Doug and Carmaine, his wife and high school sweetheart, were both teachers. They have four adult sons and seven grandchildren and, according to Doug, "Two more grand kids on the way later this year." Both he and Carmaine are looking forward to more visits wit...