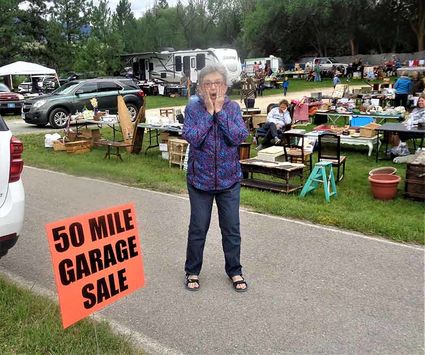 My wife could hardly believe that two of the days we visited the Bitterroot Valley coincided with the annual two-day 50 Mile Garage Sale, with yard/garage sales along the 50-mile route from Lolo to Darby. One seller told, "The Bitterroot Valley is full of dedicated "junkers," people who collect and then sell." This photo, of my wife who loves yard sales, was at a hot spot near Lolo, a community about 10 miles south of Missoula.

Reporters note: An invitation to a birthday party in Hamilton and my wife's attempts to learn more about our adopted state resulted in our visiting the Bitterroot Valley-the valley that runs south from Missoula along the base of the Bitterroot Mountains. Though we'd driven through parts of the valley on occasion, we'd never really taken the time to poke around and learn about the area. After three days in the Bitterroot, here's some of what we found interesting about the valley and its environ.

Driving US 93 south out of Missoula, the first settlement is Lolo. Travelers' Rest State Park is located where US 12 and US 93 intersect at the edge of Lolo. On our way south to Hamilton we decided to stop and learn about the area.

This site has been a stopping place for travelers for hundreds of years. Ancient paths from all four directions converged on the site known by indigenous peoples for its plentiful game, edible and medicinal plants and as a place for rest and fellowship. An interpretive guide noted that since many transient tribes rested there on their way to hunting and gathering areas. It was common for one group leaving to fold up the covers to their tipi's and move on, leaving the standing poles for the next group of travelers to use.

Lewis and Clark stopped at Travelers' Rest both on their way west (1805) and on their return trip (1806). It was from Travelers' Rest that the Corps of Discovery split up in order to more fully explore the area from the Bitterroots into what eventually became North Dakota. The route west, over the Bitterroots and through what would become known as Lolo Pass, was marked by indigenous people with tree blazes and rock cairns. A marked trail east was called "Road to the Buffalo" by the Nez Perce who moved through the area to hunt.

Once each year, starting four years ago, what is billed as a "50 Mile Garage Sale" begins at Lolo and follows US 93 south through the valley. The two-day event is held the last Friday and Saturday of June and includes sellers, individually and in groups called 'hot spots,' along the fifty road miles from Lolo to Darby to the south.

We saw the first sellers with the 50 Mile Yard Sale next to the entrance to Travelers' Rest. By the highway, in a parking lot filled with sellers and their wares, I visited with two Karens-one from Florence and one from Missoula. This was their fourth year as sellers at this "hot spot" (a hot spot is where several sellers pay to set up their wares together. Having multiple sellers in one spot is a draw for buyers who don't have to keep driving from one individual seller to the next). The Karens shared why they enjoy the two-day event and offered some tips for future "junkers."

Karen 1 said, "We buy and store items throughout the year. When we start sorting and loading stuff for the 50 Mile Sale it's like Christmas since we haven't seen what we have in a year. Regarding buying, Karen 2 suggested, "Only buy stuff you love. If you don't love it, there's a pretty good chance buyers won't either. And, it helps if you are a bit crazy."

To learn the history of the 50 mile sale, we were referred to Gary Garthwait who is credit with the idea. At The Creamery Antiques Mall in Stevensville, we found Garthwait on a lunch break. He said, "I lived in Montana and used to go down to the southeast a couple of weeks in the fall and spring to ride my motorcycle. I'd buy and ship items back to Montana along the way. I saw several long distance yard/garage sales and thought we could do something like that in the Bitterroot Valley."

Back home he formed a committee representing the communities along US 93 from Lolo to Darby. Now in its fourth year, Garthwait said there are about 300 sellers each year with 60-70% of the sellers returning each year. The organizing group has matured to the point that its members are now writing "operating manuals" for the various volunteer positions so, "future volunteers will have some sort of a guide to what needs to be done. We want to avoid an organization that is totally reliant on just a few people who started the garage sale idea." You can find more about the annual sale at: http://www.bitterroot50milegaragesale.com.

First European settlement in Montana was in Stevensville area

A short distance from US 93, heading in to Stevensville on MT 269, is Fort Owen. Fort Owen, now a small state park smack in the middle of a private working farm/ranch, was the original site of St. Mary's Mission. At the request of the Flathead and Nez Perce people in the valley, Father Pierre DeSmet, S.J., and his party began Montana's first European settlement in 1841. The development included the construction of several small buildings, planting grain fields, initiating an irrigation program, raising livestock and building a mill for producing flour. The mission closed at that location and the property was purchased by John Owen who operated a trading post for many years. The site was donated to the state in1937 and operates as a small archeological site.

The current site of the current St. Mary's Parish is in Stevensville proper. That parish was created in 1910 with a number of original buildings still on the site as well as a pioneer cemetery. The old parish is now an historical site but a functioning church and related facilities are adjacent to the old chapel and out buildings.

Riverside: a summer home for a copper king near Hamilton

Marcus Daly came as to the U.S. as a 15-year old Irish immigrant to work in the mines at Butte. He built a fortune based on copper and, like many of the wealthy of his day, wanted a summer home away from Butte. The current mansion, purchased by the state in 1986 with funds from a special preservation trust, was originally completed in 1910 by Daly's wife. Daly died in 1900 with an estate valued at $75 million ($2 billion in present buying power).

The original farm house went through several renovations and additions over the years. The current Georgian Revival style house has more than 50 rooms with 25 bedrooms and 15 bathrooms. At one time Daly owned 28,000 acres of land in Montana. He loved horse racing and built a number of substantial facilities for his horses, including his own veterinary hospital, on his Montana properties. Daly's family spent summers at Riverside, the mansion in Montana, living the rest of the year in New York City.

The restored mansion now sits on 40 acres. About 10 years ago, with funds raised from various private donors, a major preservation effort brought the house to its current state. Tours are available and among many interesting things about the house is a set of photos, one in each room, that shows how the house looked inside in the early 1900's. The Daly Mansion Preservation Trust operates and maintains the house. See dalymansion.org for details about Riverside, Daly's mansion outside Hamilton.

The smokestack that never smoked 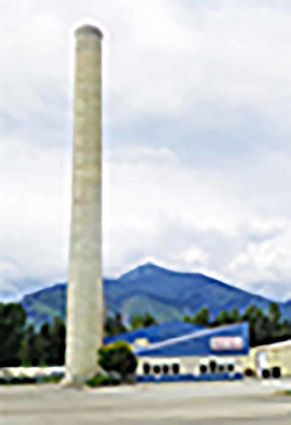 This fifteen-story smokestack was completed in 1917 for a proposed sugar beet processing plant in Hamilton, toward the south end of the Bitterroot Valley. A number of financial and other issues, including the outbreak of World War I, ended the plans for a processing plant. In 2000 Ravalli County bought the site and constructed a search and rescue headquarters. A pair of gigantic, lighted "R's" were installed atop the smokestack in the early 1970's by a local business owner. Taken down for safety reasons, one of the 12-foot tall letters can now be seen on the side of a microbrewery in downtown Hamilton.

The Bitterroots make a spectacular backdrop as one enters Hamilton from the north. But, for those offus from sugar beet country, a 15-story smokestack is a definite reminder of home. Yes, I learned, it is an abandoned smokestack completed around 1917 for a planned sugar beet processing plant that never was built. The 15-story stack was built by the Utah and Idaho Sugar Company. A series of financial challenges stopped the work but the chimney survived.

Ravalli County bought the smokestack site and eventually built a search and rescue headquarters there. Back in the early 1970's a local businessman had two 12-foot tall neon "R" letters built and set atop the smokestack to promote his businesses. For safety reasons the letters were removed before the 2010 sale. One of the 12-foot letters is now displayed on the side of the Bitterroot Brewing building along the railroad tracks in Hamilton. Like many other farming areas in the region, when sugar beets were raised in the Bitterroot they were shipped to Billings for processing.

The Bitterroot Valley is a beautiful area and...it is getting rather crowded as best I could observe. I ran in to a number of transplanted Californians who complained, "In another 50 years this place will look like what I left." They were referring to the traffic, the new housing developments and the general hub-bub that seems to be taking over parts of the valley.

All that growing congestion made me thankful to live on the Hi-Line. Maybe the real benefit of travel is to appreciate home with a new perspective. Despite all the beauty of the Bitterroot, it was good to be back home on the prairie.