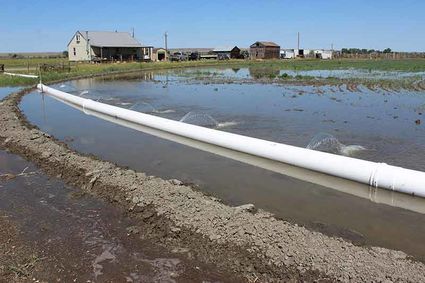 This photo from a farm west of Zurich shows a 270 foot wide section of a field of oats being irrigated with a gated irrigation system. Using a new booster pump to increase water flow, the farmer says he can get the required amount of water on the field about four times faster than simply relying on gravity flow. The pump was installed to let locals see how the new device works. Greg Skoyen is the local sales source for the new booster pump.

Greg Skoyen had a booth at the Blaine County Fair where he was displaying and promoting a recently designed gas-powered irrigation booster pump. The device basically increases the volume of water moving from an irrigation ditch through a gated system to a field. Skoyen put me in touch with the Billings-based designer and builder of the pump, Travis Kelsey, who sells specialized ag equipment.

Kelsey and his pump co-deigner Brad Kembel, a farmer, came up with the idea for the new pump after seeing a need for a better, cheaper and easier way to speed up getting water on to fields via gravity flow gated systems. Kelsey described the new piece of equipment as, well, "a better mousetrap."

A classic case of seeing a need and creating a

new product to fill that need

Travis Kelsey, who sells to irrigators, said he had heard from his own customers about their frustrations with existing booster pumps for gated irrigation systems. He said, "There is some equipment out there that will boost the volume of water but those pumps have limitations. Some require a tractor dedicated to provide PTO-produced power." Others need electricity, which is usually not where you need it. And most of the existing pumps are expensive to buy and run, difficult to maintain and not very portable which limits an irrigator's ability to use the equipment in multiple locations.

The two wanted an affordable, strongly built and reliable pump, one that could be easily moved to multiple locations, was easy to set up and maintain and had the ability to significantly reduce the time it takes to get water onto a field. They built two prototypes and ran them in field tests last year. This year they sold 10 pumps and sent two more out for demonstration, one of which ended up on a farm on Dead River Road, just south of Highway 2 about midway between Zurich and Harlem. I visited the test site to learn about this new, better "mousetrap."

pump for only a few days

Though the pump had only been hooked up for a few days, grain farmer Fred Horning had already seen some advantages to the new equipment. He said, "We got a late start seeding this field because of high water on and around it. Where we needed to set the pump was difficult to access but two guys were able to haul the pump in to the location using a side by side. They got the pump set in about 20 minutes, under better conditions I'd guess it would have only taken 10 minutes to set." The designer of the pump told me later, "The unit only weighs about 200 pounds and was designed to fit in the box of a side by side. We also designed the new pump so minimal, common tools are needed to set it up and, in most cases, maintain it."

What really impressed Horning about the pump was how fast he could get water on to the field. He said, "Without the kind of capacity this pump produced I would have lost this field before I got it all irrigated." Even "not cranked up all the way" he figures the pump allows him to irrigate an area about four times faster than his usual gravity fed rate. The day I was there he was putting water on a 290-foot wide section, irrigating areas between three checks at once.

Though the GX 160 5.5 horsepower gas engine is smaller than engines on similar pumps, designer Kelsey says the pump will produce more volume than larger models on the market. The engine is equipped with a gear reduction unit and is belt driven. Asked about the 2.5 gallon gas tank, which farmer Horning said had to be refilled every three hours, Kelsey said, "I know that is a problem but for liability reasons we have to sell the pump with that sized tank. I'm guessing most end-users will add a larger tank for convenience." The first 10 pumps produced for this season were sold in one and a half days.

One interesting testimonial from a first purchaser of the new booster pump was made by phone to Brad Kembel, the farmer/partner who helped design and build the new pump. A friend told Kembel over the phone, "I'm in town having ice cream with my family. Without this new pump I'd still be babysitting the irrigation at home, not enjoying ice cream with my wife and kids."

Production and local sales will begin this fall

Travis Kelsey said as a preventive measure there is a planned replacement of a metal shaft on the first 14 pumps produced. He explained, "After our field testing we decided a stainless steel shaft would be preferable to the original shaft we used. There have been no failures, it's just a cautionary move to head off problems." Kelsey said earlier that he and his co-designer spent a lot of time with experts to chose component parts for the pump that would be the most serviceable and readily available through a variety of suppliers. 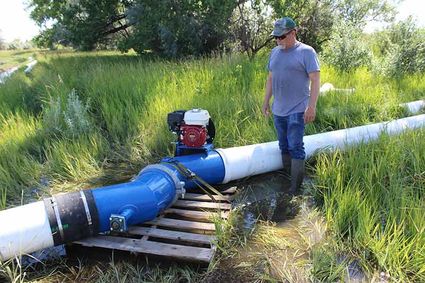 Blaine County farmer Fred Horning is pictured next to a demonstration booster pump designed to increase water flow through a gravity-fed gate irrigation system. The pump was designed and built by two business partners in Billings, one of whom sells irrigation supplies and the other a farmer. Horning said of the demonstration pump, "I can get the necessary water on a field about four times faster than I could without the booster pump."

The two who designed the pump also will do the building of future ones. Kelsey said, "We think with our present shop facilities that Brad Kembel and I can produce about 65-70 units at a time. We each will perform certain tasks on the pumps, then move them to the other builder's area for completion." Kelsey added, "If this pump really takes off, as we expect, we have access to additional shop space that we could begin using in just a few days."

Production is scheduled to begin in the fall. Kelsey said, "There will be minimal demand for the pumps through the winter so we can use that time to build an inventory. The pumps will be available for Spring, 2019." He said there are already several preorders for the pumps from irrigators who have seen the booster in action.

Locally, Greg Skoyen, doing business as GD & J, will be selling the pump. Greg was instrumental in getting a demo unit that is at Fred Horning's place here in Blaine County. Skoyen said, "I believe I have two sold already. In the future there will be no need for a demo plot as we'll have pumps in use and available for a potential user to see."

To learn about the pump's availability, receive technical information or arrange to see a pump in use, call Greg Skoyen (cell is 399-2343 and home is 357-3154). Greg said his son will be involved with promoting the new pump and is helping with the irrigation supplies currently offered by GD & J.