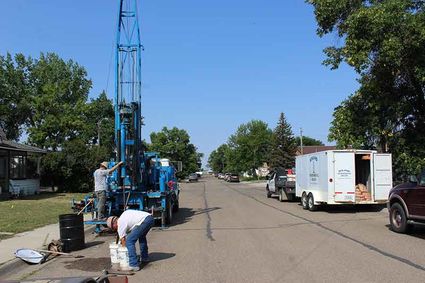 A crew with Boland Drilling, Great Falls, is shown on West Fifth Street sinking one of two new monitoring sites for the buried tank removed from the northeast corner of Indiana and Fifth. The two new holes bring to 16 the number of monitoring sites in the area. Samples are taken and analyzed twice a year from the monitoring wells to determine the extent of the contamination from the old tank site.

A crew was in Chinook last week to drill additional monitoring wells on West Fifth Street just west of the Blaine County Museum and another on Pennsylvania, south of the intersection of Fifth Street and Pennsylvania. The two new wells are in addition to the 14 monitoring sites drilled in 2014. The monitoring is for a site at the northeast corner of Indiana and Fifth Street where a buried gasoline tank leaked. The tank was removed some time ago.

Ross Remsen, Environmental Engineer with CTA (architects/engineers out of Great Falls), helped identify the locations for the original 14 wells. H...