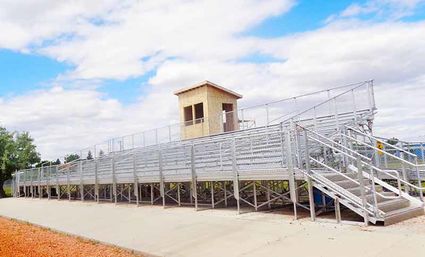 The new announcer's booth behind the north bleachers at Hoon Field in Chinook, pictured here, will be completed by football season this fall. The materials for the booth were financed by a number of local businesses and volunteers did the construction work. It was one of several summer projects to help prepare Chinook schools for this fall's opening.

Reporter's note: Several weeks ago Don Swenson, Maintenance Engineer for Chinook Schools, asked me to come visit with and write about the summer cleaning crew at the schools. Since there are likely crews doing similar work all over the county, state and nation, I thought it sounded like an interesting story topic.

Explaining why he thought it was important for people to know what happens in the summer, Swenson said, "Some people have the idea that when the schools close for summer nothing happens until the fall. The summer is when we do deep cleaning, perform preventive maintenance and take care of projects that would disrupt school if we tried to do them during the school year." Swenson has held his position for the past five years.

I arrived at Meadowlark School at 9am. The summer crew was taking a break. Most of the crew had started at 5am so the break was like lunch in the middle of their eight hour shift. I visited with Swenson about the makeup of the crew, the kinds of tasks they do and how they do their work. Then I listened to the crew share their thoughts about working on the summer cleaning crew. Here's some of what I learned about summer cleaning crews and their work.

Working in the heat is the major challenge of how summer crews work.

Don Swenson said there were 13 people that made up the summer cleaning crew. That included six full-time school employees (mostly custodians) and seven additional workers. The seven other workers are connected to the school as paraprofessionals, staff members, kitchen workers and even, for the first time since Swenson took the job, a teacher. The crew begins their work the day after school ends in the spring and their summer contracts end in mid-August. Swenson said, "They will finish up about a week or 10 days before school starts. We'll use some of that time for painting and other projects still in the works."

The crew works an eight hour shift, five days a week for a forty hour week. To avoid working in the hottest part of the day, most start at 5am or 6am and quit eight hours later. Swenson said, "We have a little flexibility in when people want to start and finish." Some of the crew said as the summer wears on and the buildings never quite cool down at night, even early in the morning is hot and gets worse later in the day.

To help reduce the effect of heat, the crew opens lots of doors and windows and has fans moving air in virtually every part of the Meadowlark building. Talking about the heat, one crew member recalled a very hot summer when, "The only way we could comfortably work was with those huge floor fans blowing directly on us. Not only was it hot but the constant wind on us wore us down as well. It was awful." Another told how very hot weather can complicate their work causing certain cleaning supplies to be less effective and, "It's harder to keep windows from streaking when it gets so hot."

Swenson said, "There's lots of lifting. The crew literally moves everything so we can clean it and clean under it. The crew cleans what they can see from the ceilings and lights to the floors." The crew begins their work on the second floor of the high school, which gets the hottest in the late summer, works though the junior high and then moves to Meadowlark. Their goal is to be at Meadowlark by July 4 to assure they can get all their tasks completed there.

Talking with the crew, they described how each crew member has a 'cleaning specialty.' They explained, "Jo Ellen MacLean is comfortable working from a ladder so she cleans the light fixtures." Barb Swenson said she was the "computer cleaner." Don Swenson added, "But if someone needs help, other crew members jump in to help them. It's an operation that requires working as a team."

More than just cleaning goes on in the summer

Swenson said projects that would disrupt school are typically put off until summer. As an example he described work currently going on to fix some shower heads which required the water to be shut off. He said, "The shutoffs in some of the older buildings don't work so we have to shut off the main water. That would be a major problem during school." Another annual project is the refinishing of the gym floors in the high school and Meadowlark. 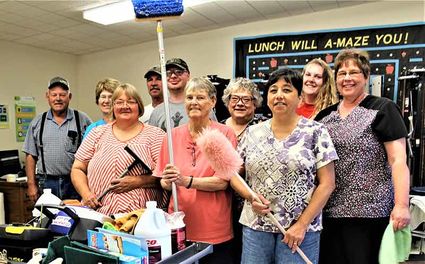 Summer cleaning crews for schools typically begin the day after classes end at the start of summer and work until shortly before school reopens in the fall. This summer the cleaning crew for the Chinook Schools hopes to finish their work in mid-August, just before the new school year begins. Pictured left to right is Don Swenson, Jo Ellen MacLean, Heidi Brown, Bob Azure, Greg Martin, Deb Olson, Judith Reed, Pam Darrah, Janelle Downs and Barb Swenson. Team members Dwight Hofeldt, Ed Harrison and Bridgette Briere were not available for the photo. The group pictured has 66 years total working on the summer crew.

A large amount of preventive maintenance is also done in the summer. Motors are checked, bearings greased and patches applied to the roof. Summer is also the time when all the supplies are ordered and received. Everything from paper products to filters for heating units have to be on hand for use during the school year. There are even summer projects away from the schools, like a new scoreboard and the new announcer's booth being added to the north bleachers at Hoon Field. Most of that work at the field will be completed by others.

I asked the crew for a response about the number of years each had been on the summer crew. Pam Darrah had worked the most years with 18. At least three others had more than 10 years on the crew. Only one, teacher Janelle Downs, was with the crew for her first year. Asked how many would be back next year, most gave a quiet nod suggesting they didn't really see any reason not to come back.

The group admitted it was hot, hard work. Don Swenson said, "I think what makes it worth the effort is when teachers tell us how much they appreciate starting a new school year with the buildings clean and everything working." Pam Darrah, the summer crew member with the most continuous years of service said, "We've talked about buying lottery tickets as a group and if we win we would all quit our summer jobs." There was some nervous laughter and one crew member added, "Oh, we'd probably just keep on working even if we won the lottery." No one seemed really anxious to abandon the team and miss out on the obvious camaraderie the group enjoys.