Brendan Edwards, will be a senior this fall at Chinook High, is shown making a presentation during the summer residency program of the Western Aerospace Scholars program in Helena. The STEM-based learning opportunity was sponsored by NASA and the Seattle-based Museum of Flight. This past academic year and summer was the first time the program was offered to Montana high school students. Brendan commented that participants made "lots of presentations related to our engineering challenges, space rover designs and plans for a manned mission to Mars."

CHS rising senior Brendan Edwards recently spent a week completing the residency component of the Western Aerospace Scholars program. The program, sponsored by NASA and the Seattle-based Museum of Flight, was founded in 2006. Students accepted to the program spend a year doing STEM-based (Science, Technology, Engineering and Math program) lessons via the internet and projects focused on space exploration and earth sciences, then complete the hands-on summer residency component. The aerospace scholars program was first offered to Montana high school sophomores and juniors during the 2017-2018 academic year.

Last year, as a CHS junior, Brendan did ten lessons via distance learning (the internet), then in early August spent a week in Helena with other Montana participants to complete the residency part of the aerospace program. He earned five hours of science credits from the University of Washington. Thirteen high schoolers completed the first aerospace scholars program offered in Big Sky country.

Asked why he applied for the program, Brendan said, "I've always enjoyed science and math. And the opportunity to earn some college credit while still in high school was also attractive." Still undecided about a college choice and a possible course of study, he said, "I'm leaning toward Montana Tech in Butte or Case Western Reserve (Ohio), both have good engineering programs. I'll likely study something involving math and science."

Phase One: ten lessons during the academic year; Phase Two: a one week summer program

Brendan explained that the ten distance learning lessons and a final project that made up Phase One were "gaining knowledge about space exploration and related math and earth science. Each lesson involved a "lot of reading," then writing an essay, completing a math problem and taking a quiz." He said, "While we could move at our own pace through a lesson, there was a deadline to complete each lesson. I learned to have a plan on how to get the work done and stick to the plan to meet the deadlines."

The final project of Phase One was to write a 2000 word essay and create an accompanying visual about a topic related to space exploration. Brendan said, "I wrote about the commercialization of space, how private businesses are launching their own space exploration missions for profit." Part of the essay dealt with some of the issues of "who owns what in space," a topic that Brendan says is very complicated and still unsettled.

Students who completed the distance learning were invited to the summer residency program held in Helena. The 13 students were assigned to four teams. Brendan's team had only three members: himself, a student from Glasgow and a student from Great Falls. He said most of the students were from larger schools like Helena and Bozeman.

Before they arrived in Helena the students were told their week-long project was to plan a manned mission to Mars. Brendan explained, "Each team was responsible for certain aspects of the mission. My team devised the plan of work for the mission once a manned vehicle landed on Mars-like samples to collect, observations to make and experiments to perform. We also designed a spacesuit that astronauts could use while working and exploring on Mars." Asked if their spacesuit looked like the one Matt Damon wore in the movie "The Martian" he smiled and said, "Ours was better because it had better peripheral vision with an improved helmet."

In addition to working on the Mars mission, each team also had several "engineering challenges" to complete during the week. One challenge Brendan described was "to build a small, launchable rocket on budget." Rather than use rocket pieces provided, Brendan said, "Our team decided to 'go on the cheap' and build the rocket from readily available items we could find. It launched fine but had a bit of a wobbly trajectory."

Another engineering challenge was to design a rover for use during a manned mission. On a field trip to Montana State University-Bozeman each team had the opportunity to explain their concept for a rover to a group of MSU faculty and scientists. Brendan said, "In addition to the science aspects, I learned during the summer program how to put together a presentation. We did a lot of presentations."

Some reflections on the Western Aerospace Scholars experience

Brendan listed several benefits he saw to the program. As mentioned earlier, he learned during the ten lessons done online to plan his work and stick to the plan in order to make the course completion deadlines. Likewise, he benefitted from the program as he learned to put presentations together and he believes his skills as a public speaker improved. 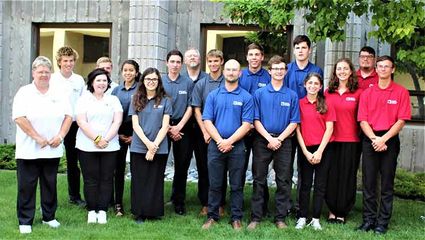 These thirteen Montana high schoolers made up the four teams that completed the summer residency program of the Western Aerospace Scholars program held in early August in Helena. The program founded in 2006 for Washington state students, was offered the first time this year in Montana. The four teams were assisted by four adult Summer Academic Facilitators, themselves educators by training and profession. The tallest individual in the group photo is Brendan Edwards, who will be a Chinook High senior this coming fall.

The major challenge he found with the program was the time commitment to complete the online lessons during the school year. He said with his regular high school classes and extracurricular activities in school, especially sports, he found it difficult to make time for every thing he had to do. In fact, during the divisional basketball playoffs he missed submitting a quiz. "That," he said, "hurt my grade a bit."

Another challenge he mentioned a couple of times how few members the teams had during the summer program. He said, "It seemed to me most of the team exercises were planned for teams with around ten members. We just didn't have enough people to accomplish all the parts of the engineering challenges and the Mars project." He explained the program was originally developed for Washington state with many large high schools. There may have to be some modifications to the summer program for Montana with fewer participating students and smaller teams.

Asked if he would do the aerospace scholars program again, Brendan said, "Yes, but I would go in to the program knowing it would be hard to work around sports scheduling." Would he recommend other rising sophomores and juniors take the aerospace program, again he had a positive but cautionary response, "Yes, take the program if you can work it in to your schedule." Hopefully future Blaine County students will look into the program and will figure ways to work the added learning into their schedules. It's a great learning opportunity at no cost to the students except a minimal fee for the college credit.