Mike Jones takes over as Head Football Coach for the Surgarbeeters 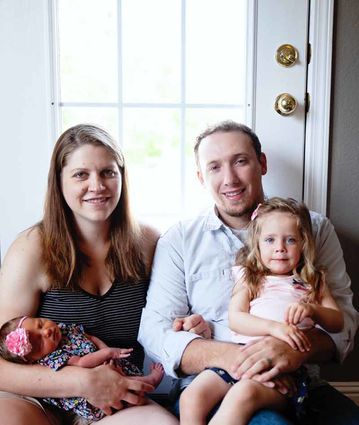 The Chinook Sugarbeeter football team is now under the direction of Mike Jones. Jones and his wife Chelsi and their two children Harper and Ember now call Chinook home. Jones previously taught Special Ed and Social Studies at Spanish Springs High School in Reno, Nevada. He is a 2007 graduate of Power High School and has always considered Montana home.

Mike Jones was hired this spring to take over the reigns of the Chinook High School Football program and is excited about the opportunity to lead a program and very happy to return to Montana.

Jones is very familiar with Class C Eight-man football in Montana. He is a 2007 graduate of Power High School. The 'Beeters and the Power-Dutton-Brady Titans have played some great games through the years but Jones won't get the opportunity to face his alma-mater because the Titan's dropped down to six-man football in 2017.

Jones has been married to his wife Chelsi for five years and the couple have two girls, Harper, who is two and a half and Ember, just a month old. Chelsi is a Vet-Tech and Mikes main job will be Grades 7-12 Social Studies teacher at Chinook Junior/Senior High School.

Jones graduated from Chadron State (NE) in 2012 and did a year of grad school at Montana State University Bozeman before accepting his first teaching job in Denton.

Jones was always a fan of sports in general but really developed the coaching bug while as a student at Chadron State, "I started going to film sessions with some of my friends who played football and seeing how they broke down film, adapted strategies to come up with game plans. I really got into that," said Jones.

In his first year at Denton he was the assistant coach under Scott Sparks for the football team and helped out with basketball as well. It was also the first year that Denton formed a co-op with Standford and Geyser to for the Bearcats.

Sparks resigned as Athletic Director after the school year and Jones took over those duties while remaining an assistant with the football and basketball teams.

Family needs led Jones and his family to Reno, Nevada where he taught Special Education and Social Studies at Spanish Springs High School, a school with an enrollment of 2,400 that competed in Class AAAA.

Jones maintained his coaching connection and was an assistant coach for football, softball and basketball.

Jones has always considered Montana home and he and Chelsi began searching opportunities to return. He began looking for teaching jobs in the state and come across an opening in Chinook that was made possible by the retirement of Doug Hayes.

Jones accepted the job and was later hired as Head Football Coach. Teaching is always the priority but the two can often go hand in hand, especially in small schools across Montana. "Coaching helps me teach and teaching helps me coach," stated Jones.

Jones jumped right in after accepting the job and quickly began learning as much as he could about the players, the division and the community.