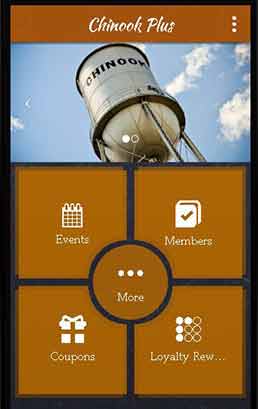 This photo shows the home screen of the Chinook Area Chamber's new phone app. "Chinook Plus" is now available for locals to download. Chamber member businesses will soon be adding coupons and other business promotions to the new smartphone app. Chamber President Sarah Pratt built the new app and is hopeful it will provide a new way for Chamber businesses to help consumers.

A new tool to help customers connect with Chamber Area businesses is now available. Chamber President Sarah Pratt created Chinook Plus, a new phone app that replaces the former "coupon book" used to provide coupons and special offers to customers. Pratt said, "We found one of the problems with the coupon books was customers often did not have a coupon with them when they wanted to make a purchases. Long term the books were often misplaced or lost. Smartphone users typically have their phone with them. When customers have their phone they'll have coupons for our Chamber member businesses."

Pratt said, "Since becoming president of the Chamber I've wanted a way to make it easier for our member businesses to promote their services and products. I know they are battling online competitors and the big box stores in other towns. Using a phone app seemed like a good way to easily connect our member businesses with their regular and potential customers."

How the new Chinook Plus app was developed

Sarah Pratt and her family temporarily lived in Miles City for about four months while her husband, Danny, was assigned there with his work. She said, "Miles City has an app for shoppers that is maintained by a local person. The app is very popular with shoppers and businesses. As a newcomer I immediately began to use it to find businesses that carried what I needed and I used the coupons to help save on purchases."

Back in Chinook Pratt began to explore what sorts of apps were already available. "What I found, " she said, "was apps that would sort of do what I had in mind but were very expensive and hardly any would do what I really envisioned. A custom built app would cost around $30,000, which was totally unrealistic for a chamber our size." So, she built the app herself. Actually, she built it twice because, "the first platform I had in mind to use for the app turned out to be too expensive so I rebuilt the app on a new platform that had a non-profit rate, a long term use discount, and a strong recommendation from someone who uses this same platform."

Getting started with Chinook Plus

Pratt said, "For customers, they can open either Google Play or Apple's App Store and download Chinook Plus for free." She added, "I'm still having a couple of issues with the App Store but should have those ironed out shortly. Keep trying if you're an apple user, Chinook Plus should be available shortly." Like the coupon books used before by the Chamber, once a customer uses a coupon or reward program it is no longer available until the business submits a replacement or a new coupon.

"A Chamber business," Pratt explained, "will be able to submit one coupon or one reward program at no cost, just like with the former coupon books we used." If a business wants multiple coupons or reward programs contact Sarah to learn more on how to do that.

Asked how the idea for Chinook Plus is being received by Chamber businesses, she said, "Some are still trying to get comfortable with the idea that a small town can have such a program as they are generally only available in larger cities. However, there are some businesses that will have their coupons available shortly." Pratt is confident that others will be adding more coupons soon.

Pratt will create and post coupons and reward programs to the app for participating businesses. She explained, "I will work with each business to help them create the kind of program they want on the app. Business members can contact me (phone at 357-4256 or email: president@chinookmontana.com) and I will explain how Chinook Plus can help their business. Then I'll create the coupons or reward program they want to have on the app."

Other features planned for Chinook Plus

Sarah Pratt has already found some new ways to use Chinook Plus, in addition to sales promotions. She said, "I plan to have the community calendar on the app. I'm currently gathering information to build the calendar. My idea is someone who has downloaded Chinook Plus will always have a

See Page A3: Chamber community calendar easily available." She said the calendar will also be on the Chamber's website (chinookmontana.com).

In addition to the business coupons there will be profiles, photos and information on Chinook Plus about each Chamber member business. Pratt thinks this will help locals, visitors and newcomers to learn where they might find products or services they need or could use. Other ways to use the app will likely be discovered as both customers and businesses get comfortable with the new process.

Now it's up to readers to give Chinook Plus a try-whether as customers, businesses or both. The "Journal" encourages locals to give this new system a try. It could turn out to be a real time and money saver, plus it's free. It's another way the Chinook Area Chamber is helping businesses help customers.