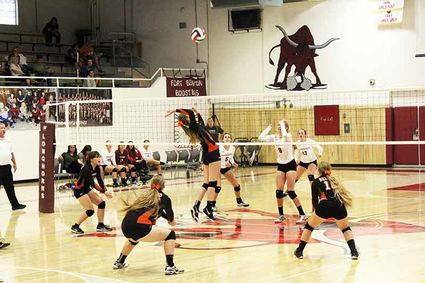 Sugarbeeter sophomore Delaney Kellam attacks the Longhorn defense Friday night in the teams 3-0 sweep of Fort Benton. Kellam led the Sugarbeeters with six of the teams 23 kills on the night.

The Chinook Surgarbeeters wanted to get the season started off on a high note when they traveled to Fort Benton to face the Longhorns in a battle between two quality teams with high expectations for the season.

The Surgarbeeters did just that sweeping the District 7C Longhorns 25-22, 25-18 and 25-17 to win their first match of the season. Saturday the team was in Malta for the M-ette Invitational where they turned in a solid effort.

Friday night in Fort Benton the 'Beeters took a back and forth opening set that saw both teams have the opportunity to take control but in the end it was the Su...