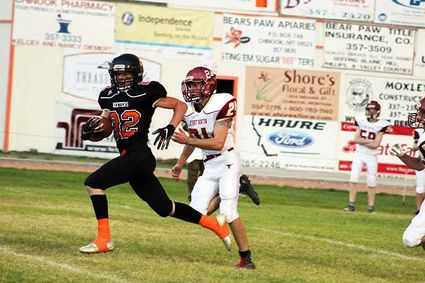 Senior Karson Powell hauls in a 35 yard reception and runs away from the Longhorn defender in first quarter action Friday night.

The Chinook Sugarbeeters improved to 2-1 on the season with a come from behind 44-30 win over the visiting Fort Benton Longhorns Friday night.

The 'Beeters got off to a fast start with junior Sam Dumas returning the opening kickoff to the Fort Benton 37 yard line Moments later senior quarterback Trajan Hannum would find Dumas for a 16 yard scoring strike and a early 6-0 Chinook lead.

The Sugarbeeters moved the ball well throughout the first quarter but a break down on the defensive side of the ball allowed Fort Benton to hold a 8-6 lead entering the second quarter.

A turnover put the Longhorns back in business and led to another Fort Benton Touchdown and a 16-6 advantage. Lightning would soon fill the darkening sky over Hoon field and play was suspended for 45 minutes.

After the delay the 'Beeters seized the momentum and controlled the game from that point on.

The 'Beeters put together a 13 play 49 yard drive that included fourth down conversion run from senior James Christensen to keep the drive alive. On third and goal from the four yard line Hannum powered his way into the endzone, diving the over the gaol line for a touchdown. Christensen add the conversion to bring Chinook within two 16-14.

The Longhorns added another score only to see the Sugarbeeters respond late in the half with a Christensen two yard touchdown and conversion, sending the teams to the halftime with Fort Benton on top 24-22.

Dumas then broke three tackles, spinning his way and running over defenders on a 51 yard touch down run with 1:31 remaining in the third quarter to give Chinook the lead back 28-24.

Early in the fourth quarter the Longhorns scored but a failed conversion attempt kept the score at 30-28 in favor of the Longhorns.

Hannum began the ensuing 'Beeter possession with an 11 yard rum and then found freshman Toby Niederegger for a 13 yard gain through the air.

Hannum again found Dumas, this time behind the Longhorn defense for a perfectly thrown 37 yard touchdown. Christensen added the conversion to put Chinook on top 36-30.

After an interception from senior Karson Powell the 'Beeters turned to Christensen to control the clock with the run game.

Christensen converted a fourth and one with a power run that gained just enough, two plays later he broke through a worn down Longhorn defense for a 48 yard touchdown to seal the 44-30 Sugarbeeter win.

The Beeters garnered 425 yards of offense in the contest nearly doubling up the Longhorns. Chinook also outscored Fort Benton 38-14 following the delay.

Hannum finished 12-23 for 188 yards and two touchdowns. Christensen carried the ball 22 times for 106 yards and a pair of scores.

Dumas caught six balls for 88 yards and two scores while also leading the team with 10 tackles. Powell also recorded 10 tackles and an interception.

Coach Mike Jones was happy with his teams performance against a tough Northern C opponent, "I think as a team we executed our game plan very well. We came out physical and then we were able to battle back from down 10 early. As a whole I think we played well except for turnovers in spots and a couple missed reads on defense."

The team is starting to come together and connect with each other, "From day one we have been preaching the team concept on everything we do. We always tell the boys to trust their teammates to do their job, because if just one guy doesn't do their job we are going to have trouble. I could talk about everyone of these guys and what they did this week from practice to a couple freshman stepping up in big situations," added Jones. 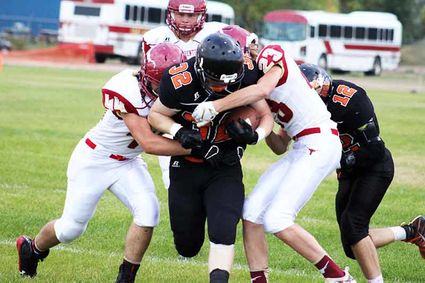 Senior James Christensen had a big game Friday against the Longhorns and sealed the victory with a 48 yard touchdown run late in the fourth quarter. Christensen finished the game 106 yard on 22 carries with two touchdowns.

Jones was pleased with the effort of all his players but knows sometimes things go unnoticed, "I think that Trajan did an excellent job managing the game both from the Quarterback spot and the Safety spot. Its always easy to pick on the Quarterback and see what he does wrong but the little stuff that he does from that position sets us up as a whole to succeed, things your not able to see from the stands."

Jones was very pleased with the line up front, "It is great to have a true Tight End in Brendan (Edwards). Tight End is one of those positions where one week your catching the ball and the next your blocking down on the Defensive Line. He is really is instrumental in our run and pass game and I think this week he was able to help the Offensive Line in the run game that as a unit had its best game of the season so far.."

"As a whole though the team played great just need to shore up a few things and get ready for another big game this week against Centerville," concluded Jones.