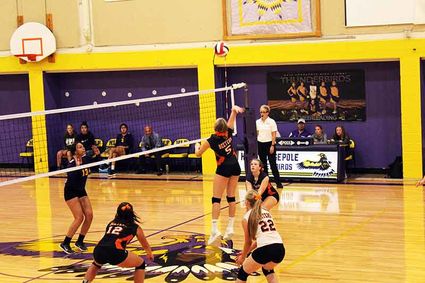 The Bears have been steadily improving the past few seasons and may have become a serious contender to pick up one of the conferences three Northern C Divisional spots.

Thursday night in Box Elder it was the Sugarbeeters seizing the momentum early in the conference clash.

Chinook cruised to an opening set 25-16 win as they had the offense and defense firing on all cylinders.

Set number two was a near repeat of the opener with the Sugarbeeters winning 25-17 to go up 2-0 in the match.

Anyone who's watched even a little volleyball knows that anything can happen and while the Sugarbeeters were looking to close out the match in three sets, the Bears were determined to push it all the way to five.

Box Elder took the third set 25-19 and then outlasted the 'Beeters 28-26 in a hotly contested fourth set which featured momentum swings and missed opportunities for both squads.

With the teams on even ground with the match knotted at two sets apiece, the 'Beeters were able to put the final points on the scoreboard to win the deciding fifth set 15-13 and win the match 3-2.

Sophomore Ginger Hauer set up the hitters with 22 assists. Hanson served up six Aces on the night while Hauer added four. Senior Lincy Johnson dug up 14 balls leading a very balanced back row that did a fantastic job keeping the play alive and giving the 'Beeters an opportunity to score a point.

Senior Ashley Macleod, along with Molyneaux and Bell added 12 digs each.

Saturday in Hays The Sugarbeeters stormed out to a big first set lead in route to a 25-9 first set win. 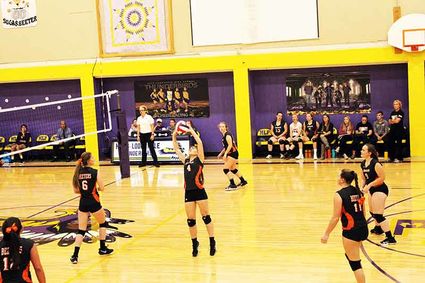 Senior Megan Molyneaux sets up the hitters Saturday in Hays.

The Thunderbirds are a young team and are building for the future. In set number two they showed some of that potential but in the end it was the Sugarbeeters taking a 25-12 set win.

Chinook was able to close out the Thunderbirds in set number three with a 25-9 win to take the match 3-0.

Hanson collected nine of the teams 26 kills in the win. Senior Rachel Gunderson served up five Aces for the Sugarbeeters and Molyneaux helped out the attack with 12 assists in the win.

Chinook will travel to Chester on Friday to take on the winless Hawks and return home Saturday to face the Fort Benton Longhorns in a non-conference Northern C clash.