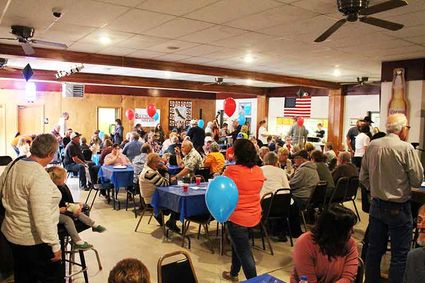 Frank Billmayer, left addresses a large crowd that gathered at the Eagles in support of Billmayers bid to become the next Blaine County Sheriff in the upcoming election. A Hamburger feed was held in Chinook while a Pg Roast was held in Harlem this past weekend. Voters will cast their ballot on Tuesday, November 6.

With regular ballots to be mailed on October 12 and general election voting set for the polls on Tuesday, November 6, the two contested offices in Blaine County (sheriff and open county commissioner seat) are heating up. In the sheriff's race between Deputy Lt. John Colby and Undersheriff Frank Billmayer, two barbeques and a pig roast have already added 'heat' to the contest. Colby held what supporters billed as a "BBQ and Family Night" back in late August (see "Journal" story of August 22). Billmayer's supporters recently held a barbeque at the Eagles in Chinook and followed up with a pig...