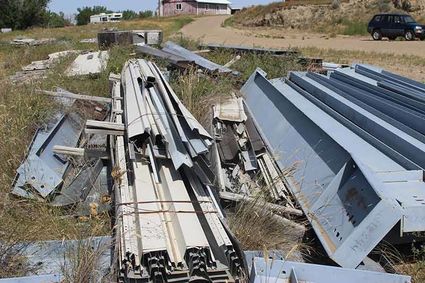 Several years ago this 100 by 200 foot building was acquired by the Blaine County from the federal government. The new metal building had never been erected. Members of the recently created Blaine County Fair Foundation are in the process of erecting the surplus building as an indoor event center. The building is currently stored at the county gravel pit south of Chinook.

Blaine County has owned a 100' x 200' steel building for many years that was being stored at the gravel pit. Richman approached the County Commissioners about putting the building to use or finding someone that would make use of it.

The Blaine County Fair Foundation was formed for the very purpose of being able to manage the monies separately and not interfere in any way with the fair budget. It's 501C3 charitable corporation that allows for all contributors to claim donations on their taxes.

Dale Williams is the Foundation Chairman, John Skoyen is Vice Chairman, Loren Skoyen and Don Richman are Board Members.

Richman is looking to the east and west in seeing an opportunity for Blaine County, "The Phillips county fair is struggling with their fair budget as well as Hill County so if they were to decide to not continue the most logical place for a three county fair would be Chinook and I think its important that we can be able and ready to jump at that opportunity should it arise. If people have questions or concerns regarding the Blaine County Fair, its board or its direction just come to the meetings or contact any board member directly as opposed to listing to gossip from coffee hour and spreading that information as fact."

If any individual is concerned and unable to make it to a meeting official minutes of every meeting are kept at the Blaine County Courthouse and are available for the public to look over.

As far as the building is concerned there is plenty of potential for everyone in the community to enjoy it, "It's not just going to be a single event arena it can be used for a wide number of events and will be bare bones at the beginning but improvements will be made when possible," said Richman. 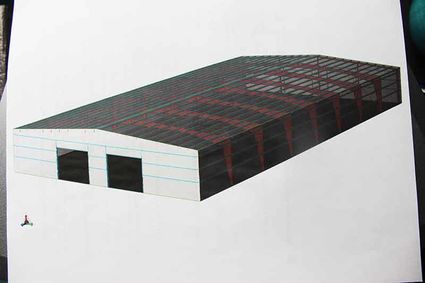 This is an engineer's rendering of how the proposed indoor event center would look. Blaine County got the 100 by 200 feet metal building through a government surplus program. It was never erected by the federal government before the structure was declared surplus. A recent Montana Tourism grant to the Blaine County Fair Foundation will be used to prepare a site for the structure just east of the rodeo arena at the county fairground.

"The 100' x 200' building would be a definite improvement to the Blaine County Fairgrounds. It will be available for all types of functions, included indoor bathrooms, which we're in short supply of right now as it is," add Richman. "We really want to provide a service to the communities of Blaine County and we look at the Milk River Pavilion in Malta as a model we can follow."

"It's not something that will be accomplished in a few short months, right now we want to get the building up and ready to be used, in the future, heat can be added and other improvements will be made as they are warranted," said Richman.

The board looks for the facility to generate enough income through to cover all of the upkeep cost as well as utilities without the involving the County or the fair budget," concluded Richman.

If anybody would like to donate to the building contact Fair Manager Debby Ramberg or Laura Kleinjan, secretary treasurer of the Blaine County Fair Foundation.

This Thursday the board will add anew member to fill the seat vacated by the departure of Mike Coppenhaver. The public is, as always welcome to attend the meeting.