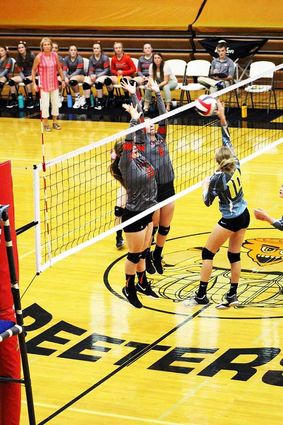 Senior Rachel Gunderson and sophomore Delaney Kellam combine to block the attack from the Hawk hitter.

The Chinook Sugarbeeters captured yet another District 6C-East Volleyball crown, finishing the regular season conference schedule with a perfect 10-0 mark.

The Sugarbeeters notched the final 'W' last Monday when they defeated the Chester/Joplin-Inverness Hawks in four sets. Overall the 'Beeters compiled a 12-2 overall record and will enter the post season as the District 6C East No. 1 Seed.

The Sugarbeeters were able to utilize their entire roster in defeating the Hawks and fine tune some things in the process.

The teams played a back and fourth opening set with the Sugarbeeters maintaining...