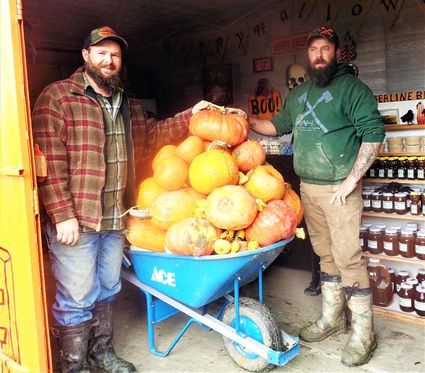 These two friends were some of the earliest pumpkin gatherers to take advantage of the "all you can stack in a wheelbarrow" deal at Black Crow Pumpkins during the 2018 season. These fellows admitted this was their third year and had "perfected a few techniques" to get the maximum produce in a wheelbarrow. Only one person can push the wheelbarrow with no one helping to balance the load.

Reporter's note: Alert readers may recall that during the last few years my wife, Sherry, and I have worked each October at Biringer's Black Crow Pumpkins and Corn Maze. It's a family owned u-pick corn patch and corn maze near Arlington, Washington just off I-5 north of Seattle. This was my fifth year at the patch owned by Gary and Julie Biringer. Sherry and I decided it was our last year to work the patch as it became harder and harder to spend a month away from home. Still, it was a great run and a lot of fun.

When Sherry and I moved to Arlington I was looking for something to do and got...