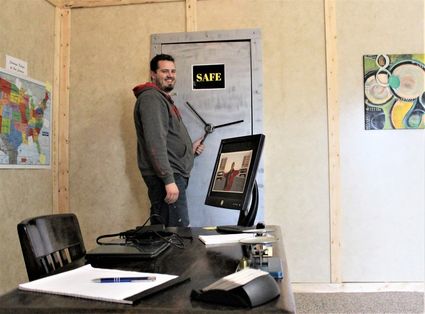 The Chinook Area Chamber opened "Escape the Hi-line," an escape room, in October. Participants play as a team doing a bank heist. They must find a hidden safe, collect the money in the safe and find the key to unlock the door to the room where the mission began. Daniel Dahl, vice president of the chamber and one of the primary creators of the escape room, poses at the entrance to the bank vault in the bank manager's office. Above right: Daniel Dahl, Vice President of the Chinook Area Chamber of Commerce, points out a new sign at 518 Indiana in Chinook. The north half of the brick building now houses "escape the hi-line," a recently completed escape room. Escape rooms provide a challenge for groups of two to six people to accomplish a made-up mission and escape from a room within a specified time. First started in Japan in 2007, 4700+ escape rooms now are located in 75 countries. The escape room is a project of the Chinook Area Chamber of Commerce.

Alert locals may have noticed a new sign on the front of 516 Indiana-the north half of the brick building just south of Edwards Funeral Home. "hi-line escape" is the newest addition to the growing trend of escape rooms. According to Daniel Dahl, Vice President of the Chinook Area Chamber, the recently opened escape room is the only one of its kind along the Hi-line, with the other closest operating escape rooms being in Kalispell, Great Falls and Billings.

An escape room is a live game, played by several people as a group, who are "trapped" inside a locked room and must solve a series of pu...