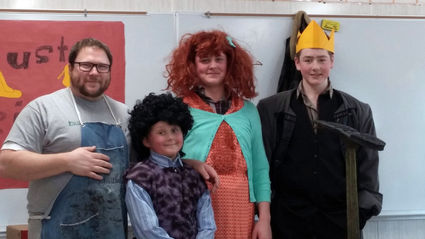 The Hartland Colony School, which is part of the Chinook School District, held its 8th Annual Christmas program on December 19 with a dramatic performance by Mr. Nick Turner and his current students. The group performed the play, The Sole of Christmas written by Mary Barile.

Before the play began, teacher at the school, Mr. Turner thanked Mr. Ron Lorang of Finest Boot Repair in Havre for his contributions to the set so that the crew could create a realistic shoe shop, Schuster Heisel.

The play's story centers around a shoemaker (played by Turner) and his wife (played by Dan Kleinsasser)...