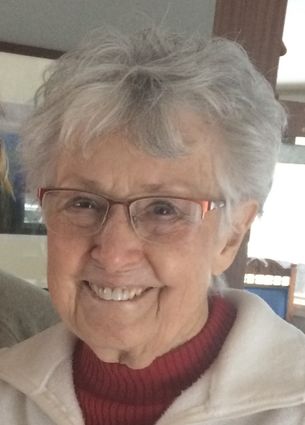 Maxine Morehouse died in Helena on January 2, 2019 of complications related to dementia. She was 83.

The way that so many people describe Maxine is that she was a classy lady. Her good nature, positive attitude, and constant smile served her well throughout her life. In high school her class voted her "Best Personality and Most Popular"-if such elections were held later in life she would have been the constant incumbent.

Born to Jim and Margie Ashton on June 15, 1935, Maxine grew up on a farm outside of Harlem. She had a younger sister, Shirley, and a younger brother, Jim, as well as a large extended family with many cousins who all called her "Tootsie" as a kid. Her first name was actually Loretta, which she hated, so from the time she went to college, everybody knew her as Maxine. Her enthusiasm for life's activities and friendships was obvious from her involvement in everything in high school: student council, band, choir, cheerleading, student newspaper, FHA, and on and on.

She earned an Associate's degree in elementary teacher preparation in June, 1955, from what was then known as Northern Montana College in Havre. At Northern, she also met Warren Morehouse, and she and Warren married in the summer of 1955. They were together almost 53 years before his death from cancer in 2008.

Maxine raised their 2 boys and did some occasional substitute teaching until 1970, when she became the bookkeeper for the newly-opened Capital Sporting Goods store. What started out as a temporary, part-time position became a career of 20-plus years managing the store's office. She always wanted to finish her degree, however, and she went back to Carroll College to earn her Bachelor's degree in business in 1991.

The Morehouse family lived a fun, adventurous life. Snow skiing and camping were essential. They had a cabin at Bridger Bowl, where for 27 years they went skiing during every weekend and school vacation from December through Easter. Even when they no longer had their ski cabin, Maxine and Warren continued to ski regularly, taking trips with family and friends throughout the Rockies, New England, and once to Val d'Isere, France. For many summers they went with groups of friends to the area's lakes and rivers to camp, boat, water-ski, and sit around the campfire. In the late 70s, Warren and Maxine swapped their camper for a cabin at Canyon Ferry, which became their home during the summer months.

Socializing with family and friends was a constant activity with Maxine and Warren. You could always count on them to show up at every party and reunion. They would use practically any excuse to turn an every-day event into a celebration; their cabins hosted a steady stream of visitors.

The Morehouses loved to travel. They would take road trips around the western United States when the boys were young. Once unencumbered by children, they went to Hawaii, Europe, and the Caribbean. As Mark and Steve started their own families on opposite coasts of the country, Maxine and Warren traveled frequently to visit their grandchildren in Oregon, Washington, and Virginia. Snow skiing trips continued to be highlights-at the age of 81, Maxine was still skiing with her grandchildren.

Sadly, Maxine began to suffer from dementia in the last few years of her life. Her family and friends watched with heartbreak as her independence and confidence became victim of uncertainty and confusion. Ultimately, her mind forgot how to take care of herself, and she passed from this earth on January 2. Being peak ski season, certainly she and Warren are together again, skiing boot-top powder on heaven's best slopes.

Maxine is survived by her son Mark, his wife Kathy, and their children Max (named after Maxine), Grace, and Sean; son Steve and his wife Jody, and their children Aylish, Tegan, and Rowyn; sister Shirley, her 2 sons and 2 grandsons; brother Jim, his wife Jane, and their 2 daughters; as well as many cousins, in-laws, and their families. Her parents and her husband of 52 years, Warren, preceded her in death.

Services were held on Saturday, January 12, 2019. Maxine was laid to rest with her late husband, Warren, at Resurrection Cemetery in Helena, Montana. Memorials in Maxine's name are suggested to Coats for Kids Program c/o Helena Exchange Club, PO Box 1054, Helena, MT 59624 or to the Hospice of St. Peter's Hospital c/o St. Peter's Hospital, 2475 Broadway, Helena, MT 59601. Please visit http://www.aswfuneralhome.com to offer the family a condolence or share a memory of Maxine..