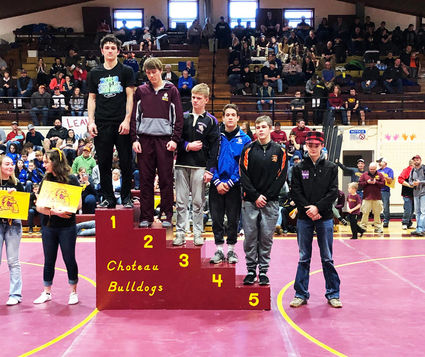 The Chinook Sugarbeeters had a fine performance at the Bulldog Invitational Wrestling Tournament in Choteau this past weekend placing two at the 31 team event. The Sugarbeeters had five wrestlers compete, as did the Harlem Wildcats.

Chinook junior JT Hauer turned in a solid effort on the mat, finishing fifth at 152 pounds. Hauer won his first match by pinfall just :38 in over William Turcotte of Wolf Point. Later in the day, Hauer won a quarterfinal match against Skyler Titsworth of Arlee by fall at the 4:38 mark.

In the 152 pound semi-final Hauer fell to Dylan Raihl (Columbus/Absarokee). After a set back in the consolation fourth round, Hauer bounced back to defeat Dallen Hoover of Whitehall by a 4-2 decision to finish fifth.

Senior Ross Reed also had a fine showing in Choteau, earning a sixth place finish at 145 pounds. Reed pinned Nathan Hollar (Columbus/Absarokee) in 3:14 in his opening match. He later lost to Columbus's Colten Getz and found himself in the consolation bracket.

Reed then pinned Boulder's Tyler Dwyer in 0:28 and Fairfield's Perez Miguel at 2:13 before falling to Darwin Adams of Charlo. In the fifth-sixth place match Reed lost to Dylan Scocilich of Anaconda by pinfall to finish sixth.

The Sugarbeeters also had sophomore Favion Couturier on the mat for the first time this season. Favion went 2-2 in Choteau defeating Parker Hufnagel (Townsend) and Jesse Uski, Plains/Hot Springs by pinfall.

Chinook sophomore Garrett Pruttis also picked up a win by decision over Tabris Correa of Shelby 7-5.

Mikkel Main added another win for the Wildcats at 205 pounds with pinfall of Kali Hood (Columbus/Absarokee) at 0:14. 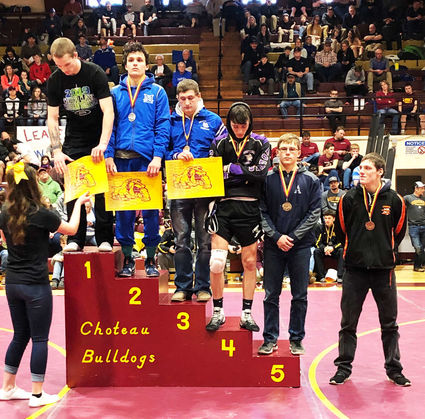 Senior Ross Reed finished 6th at 145 pounds for the Sugarbeeters.