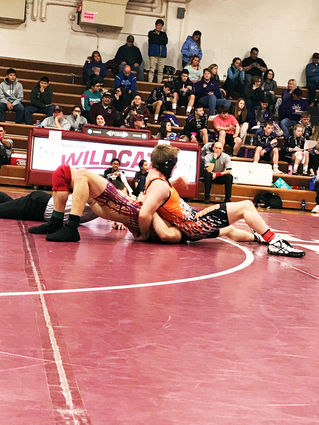 Chinook sophomore Favion Couturier controls his opponent, Dillon Geyer of Fort Benton/Big Sandy in the 160 pound semifinal at the Harlem Invitational on Saturday. Couturier pinned Geyer in 1:06 to advance to the final where he would finish second.

The Chinook Sugarbeeters hosted their final home mixer of the season on Friday night and the Harlem Wildcats held their annual Invitational Tournament on Saturday as the teams head into the final weekend of wrestling before the Northern B/C Divisional in Cut Bank on February 2.

Both the Wildcats and the Sugarbeeters honored their seniors at each of their home events and we will have pictures in our next edition.

The Sugarbeeters wrestled well and placed four on the podium while scoring 65 points on the day. The host Wildcats recorded one podium finish and tallied 29 points.