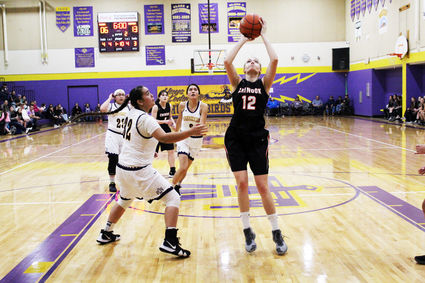 Chinook senior Kourtney Hanson scores two of her game high 19 points in the Sugarbeeters 41-33 win over the Thunderbirds in Hays Friday night.

Chinook evens record at 6-6 with wins over Hays/L.P. and Big Sandy

The Harlem Wildcats had a huge weekend on the court taking down two teams ranked in the State B Top 10. Friday they opened up a big lead early over the No. 9 Malta M-ettes, but unlike their previous meeting, Harlem maintained its advantage to secure a 62-40 win.

Saturday the girls were in Wolf Point, looking to atone for a 52-50 loss to the No. 2 Wolves back in December. They did just that, scraping together a 53-50 win to move atop the District 2B standings.

The Chinook Sugarbeeters evened their season record at 6-6 after p...