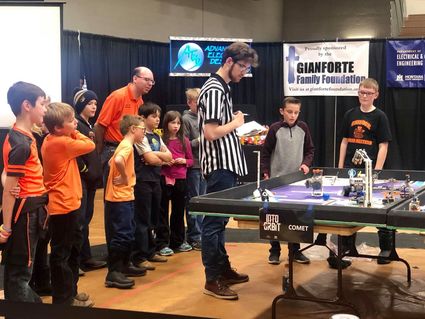 FIRST Lego League Tournament Competition. During the Robot Game, the Chinook Robotics Team carries out various robot missions while a judge records the points earned by the team.

A team of ten Meadowlark Elementary School students from grades three through six and two of their coaches travelled from Chinook to Bozeman this past weekend to compete in the 2019 Montana State FIRST Lego League (FLL) Tournament, which was held on January 26, 2019 in Shroyer Gymnasium on the campus of Montana State University (MSU). Out of 78 teams, Chinook finished somewhere in the middle of the pack after three rounds of competition.

Every year, FLL releases a Challenge, which is based on a real-world scientific topic that inspires young people to think like scientists and engineers. Each Challenge has three parts: the Robot Game, the Project, and the Core Values. Teams participate in the Challenge by building and programming an autonomous robot to score points while performing missions on a themed playing field (Robot Game) and by developing a solution to a problem they have identified (Project), all guided by the FIRST Core Values.

Teams receive scores on each of the three parts. In the Core Value category, teams are deemed exemplary, accomplished, developing, or beginning for their Inspiration, Teamwork, and Gracious Professionalism. For the Project, teams are judged on their Research, Innovative Solution, and Presentation. On the Robot Design, judges look for durability, mechanical effectiveness and mechanization in the design itself. In the Programming, the robotics should be excellent, efficient, and automatic. Strategy and Innovation are also considered in the rating of the robot.

This year's challenge, Into Orbit, was released on August 1 and challenged students aged 9-14 to explore living in and traveling through space with this message: "Gather your crew and get ready to explore, challenge and innovate in the demanding and inspiring expanse we call space! The 2018-2019 FIRST LEGO League Season requires you to work together to break out of your earthly constraints. Design a Robot using LEGO® MINDSTORMS® that can solve the Mission(s)."

In response to the Challenge-What does it take to live on a space station or travel to another planet?-the Chinook team had to 1) create a Mission Model that would transport earthlings to Mars, 2) identify a physical or social problem faced by humans during long duration space exploration within our Sun's solar system and propose a solution, and 3) share their problem and solution with others.

For the purposes of the Into Orbit Challenge, FLL defined a physical problem as one that impacts the immediate health or safety of a space explorer, such as the need for air, water, food or exercise. A social problem is one that could affect the long-term ability of a human to be productive in space, like isolation and boredom. "Long duration" space exploration means spending a year or more in outer space.

Chinook's FLL team was composed of two third graders: Ethan Klingaman and Amina Shellman; five fourth graders: Gus Buck, Kenneth Gruszie, Riley Ingersoll, Brooklyn Terry, and Henry Miller; two fifth graders: Carson Kelly and Liam Morrow; and one sixth grader: Asher Brinkman. They received their robot Lego kit at the end of September and spent the next seventeen weeks under the supervision of their coaches-Mr. Jon Martin, Ms. Shandel Fouts, and Mr. Aaron Morrow-building and programming their spaceship-themed robotic craft with an astronaut on board so that it could perform "missions" on the pool table-sized playing field at the tournament.

During the Robot Game, the robot's missions involved performing a variety of functions, such as lifting a strength bar, deflecting a meteor, or crossing a crater. Teams were not only awarded points for each of these functions but could receive penalties for each time the robot is interrupted.

According to the team's head coach, Mr. Martin, who not only serves as the Meadowlark Elementary School Principal but as the school's Gifted Education Coordinator, Chinook students addressed the challenge of getting new tools into space to help with surgery.

Because one of the FLL signature Core Values is Teamwork, students had to rely on one another's unique specialties and talents while participating in all aspects of the Robot Game and the Project. To round out the set of Core Values, FLL names Discovery, Innovation, Impact, Inclusion, Gracious Professionalism, and Fun.

Because judging is closed to spectators, Julie Terry, an English teacher at Chinook High School, graded papers while she waited for her daughter Brooklyn's team to run their robots at the competition at MSU.

"There is something electrifying about being surrounded by so many inquisitive, creative minds. Kids are cool. People who inspire, equip, and facilitate kids towards discovery are pretty cool, too. Cheers to the coaches and sponsors who make these things possible," Terry said.

Past Challenges have been based on topics such as nanotechnology, hydrodynamics, quality of life for the handicapped population, and transportation. By designing Challenges around such topics, participants are exposed to potential career paths within a chosen Challenge topic, in addition to solidifying the principles of science, technology, engineering, and math (STEM) that naturally come from participating in the program. Team members also learn valuable life and employment skills which will benefit them, regardless of the career path they choose.

FIRST, which stands for For Inspiration and Recognition of Science and Technology, was founded in 1989 to inspire young people's interest and participation in STEM. Based in Manchester, NH, the non-profit public charity designs accessible, innovative programs that motivate young people to pursue education and career opportunities in the STEM areas, while building self-confidence, knowledge, and life skills.

Since 2007 the Montana FLL and FIRST Tech Challenge competitions have been hosted by MSU's College of Engineering. The competitions were free and open to the public, although judging was closed to the public. The Robot Games ended at 4:30 p.m. followed by a closing ceremony and High Five Line at 5:00 p.m.

The Chinook team was sponsored by the Chinook School District in partnership with the MSU Blaine County Extension. According to Extension Agent, Julianne Snedigar, several youth with 4-H membership were involved and reported having a great time.

The championship teams from the FLL tournament will be invited to advance to the World Festival FIRST LEGO League Championship based on Champion's Award criteria. The championship will be held on April 17-20 in Houston, Texas.