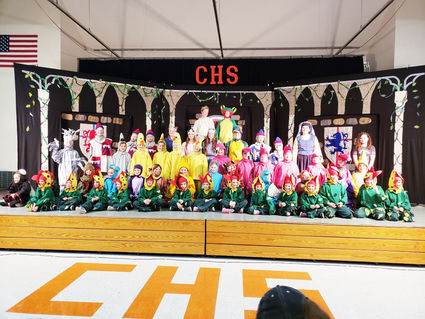 On Monday, students from the Meadowlark Elementary and the Chinook Jr./Sr. High School auditioned for parts in the Missoula Children's Theatre production of The Frog Prince. Their were two performances held at the Chinook High School Auditorium on Saturday afternoon. Pictured above is the cast of the play following the afternoon performance.

A week of intensive practice sessions with the Missoula Children's Theater (MCT) Tour Actor/Directors culminated for area youth on Saturday, February 2, at 1:00 p.m. and again at 3:30 p.m. at the Lloyd Sweet Auditorium at Chinook High School with a full stage musical production of The Frog Prince.

Conceived and written by Michael McGill with music and lyrics also by McGill, the story is set in the royal swamp and features a lonely frog and a selfish princess in starring roles. Hoping to perform a favor and gain a friend, the Frog agrees to retrieve a golden ball which Princess Prim has dro...