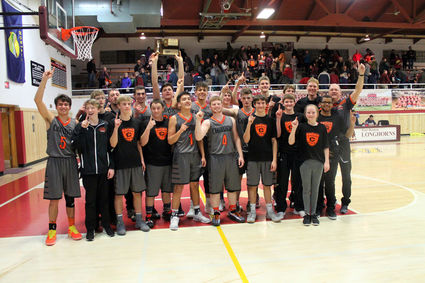 The Chinook Sugarbeeters celebrate their District 9C Conference Championship following their 57-34 win over the Fort Benton Longhorns Saturday night. The 'Beeters won convincingly, with an efficient offense and a staggering defense that limited the high scoring Longhorns to just 11 second half points.

The regular season has run its course and now its time for the Chinook Sugarbeeters, Hays/Lodge Pole Thunderbirds, Turner Tornadoes and Harlem Wildcats to turn their attention to the District 2B and 9C tournaments this weekend.

The Sugarbeeter boys basketball team put an exclamation point on the 2018-19 regular season by capping off an undefeated campaign with a resounding 57-33 win over the Fort Benton Longhorns Saturday night. With the win the 'Beeters celebrated their second straight District 9C championship on the Longhorns home court.