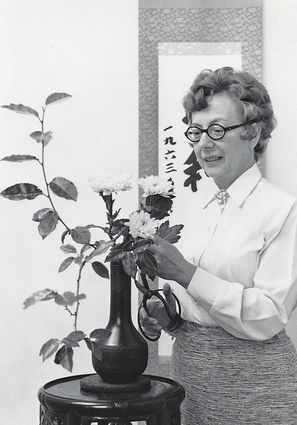 Allie Marie Umsted Uyehara, age 92, died February 5, 2019 at her daughter Vera's home in Wheeling, WV. Allie Marie died due to complications of the disease Progressive Supranuclear Palsy (PSP), after a long battle of 10 years. She bravely endured this disease which paralyzed most of her muscles, and at the end was able to donate her brain to the Mayo Clinic for research. She is survived by her husband of 69 years, Cecil, her daughter, Vera (Chuck Wood), her son, Geoffrey, nieces and nephews, Anita, Tony, Alba, Fuji and Andrei, and a large international community of students of ikebana – Japanese flower art.

How did a girl who grew up in Montana and lived most of her life in Washington, DC end up in Wheeling, WV? After 69 years of living with her husband Cecil Uyehara, Allie Marie and Cecil moved to Wheeling in 2017 to live with their daughter Vera Uyehara and son-in-law Charles Wood.

Allie Marie was born in Hawthrone, CA to Lennea Sabrina Berg Umsted and Raymond Ver Umsted on May 30, 1926. A year later they moved to Chinook, Montana, driving an auto with only side curtains for protection. In Montana, Ray ultimately became a prosperous owner of a lumberyard, and her mother taught school, offered piano lessons, became the chair of the State Republican Women organization, hosted literary and history club meetings at their home, and provided a nurturing home for their only child.

Allie studied piano with her mother, took singing and tap dancing lessons and began singing and playing the piano in recitals, concerts, churches, and in high school was selected as State Musician.

In 1944, Allie graduated from Chinook High School, and started her freshman year on an academic and music scholarship at the University of Montana in Missoula.

She became disgusted with the Music Department there, and transferred to the University of Minnesota in Minneapolis-St. Paul. Allie pledged and was initiated into the Alpha Chi Omega (music) sorority. She was active in campus activities, and most importantly became the recording secretary of the Cosmos Club, an international group of US and foreign students.

She graduated with a double major in Music and Geography in 1950, and then began a masters degree in Geography. Her progress was interrupted by the arrival at the Cosmos Club of a cool, suave, handsome foreigner named Cecil Uyehara, an Anglo-Japanese graduate student from Japan, who had been educated in British schools in Shanghai, China.

After graduation Allie taught in a one-room school in the Bear Paw Mountains of Montana with six students, one in each grade. This is where she killed her first rattlesnake. After putting on the first Christmas program in the history of the school, with all six students performing, she and her parents drove to Minneapolis for her marriage to Cecil Uyehara. She and Cecil were prohibited at that time from marrying in Montana because of the miscegenation laws of that state.

In September 1951, Cecil accepted a position at the Library of Congress in Washington, DC. The capitol city became their career and family center for many years. Allie held a variety of jobs, first as a secretary for the US. Air Force, then as an elementary school teacher at Upper Marlboro, Maryland, next as a secretary for the National Temperance League, and finally, using her geography specialty, in a top-secret job (CIA) as a research analyst at the Library of Congress. One secret that escaped was their daughter Vera who was born in January 1953 in Washington, DC.

In 1955, the family travelled to Tokyo when Cecil received a Ford Foundation Fellowship to study the Japanese Social Democratic Party. After their son, Geoffrey, was born in June 1955, Allie began formal study of ikebana, Japanese flower arranging; she earned her teaching certificates in the Sogetsu School and the Saga Koryu School. By August 1956 when they left Japan, she had become an officer in the nascent Ikebana International organization. Allie went on to found three chapters of Ikebana International, in Chinook, Montana, Boston, Massachusetts, and Dayton, Ohio.

From 1956 to 1958, the family lived in the suburbs of Boston, Massachusetts, where Allie organized the first Japanese Flower Arranging Exhibition at the Jordan Marsh Department Store, and continued teaching and demonstrating ikebana. The family then lived from 1959 to 1964 in Dayton, Ohio, where Allie founded the Dayton Ikebana International Chapter #33. She and Cecil built their first home there, which included a large garden to grow vegetables, flowers and branch material for ikebana. In Dayton, Allie became involved in politics, serving as Chairman of the Independents for John F. Kennedy for President movement. In Dayton, she continued her music activities and was soprano soloist for the Salem Avenue Unitarian Church.

From Dayton, Ohio, in 1964 the family moved back to Boston, Massachusetts where Cecil studied at Harvard University through a National Institute of Public Administration fellowship. Allie continued to teach and demonstrate during this year. From Boston, the family moved to Washington, DC in 1965, and Allie joined Ikebana International Chapter No.1. Allie continued to teach and demonstrate for the Sogetsu School. During these years, Allie made periodic trips back to Montana, and every other year, presented an Ikebana class for the Chinook chapter. This Chapter remains active today, and is one of the oldest chapters in the nation.

In 1979, Cecil joined the Foreign Service Reserve with the Agency for International Development and they started a great adventure in the wonderful country of Afghanistan. In Kabul, Allie taught ikebana to Americans, Afghans, and other members of the diplomatic corps. She continued to demonstrate in many international venues, and organized a large Ikebana International exhibition at the grand Intercontinental Hotel of Kabul.

Before they moved to Afghanistan, Allie had begun to work on a book about ikebana. In Kabul, she finalized the book, Ten Keys to Japanese Flower Arranging, which was published in 1975. While in Kabul, in addition to a busy ikebana teaching schedule, Allie served as the President of the American Women's Association, and was soprano soloist for community concerts. In 1971, she organized a special ikebana exhibition at the Intercontinental Hotel, Kabul, Afghanistan, with the proceeds donated for prosthetics for crippled children.

After the family returned from Afghanistan, Allie resumed activities with her Alpha Chi Omega sorority from college, and became President of the Alumnae Panhellenic Association. She also renewed her passion for music, being a member of the Welcome to Washington International Club Choral Group from 1984 to 1995.

Between 1986 and 1990, Allie wrote a weekly column "Washington Chronicle" for her hometown Montana newspaper, the Chinook Opinion. These articles reflected and interpreted the current events in Washington, DC with a liberal slant, and were received in Chinook with consternation. Her academic training, international travels, personal commitment and Montana roots combined to give her an unusual perspective for the Montana weeklies. A collection of these essays and articles has been collected and published for the family.

Allie's long career in Ikebana International spanned 60+ years, starting with the founding of Ikebana International in 1956. She was honored in 2016 at a 60th anniversary commemoration with a standing ovation and a gift of beautiful flowers. She was the President of I.I. Chapter No. 1 from 1973-75, Chairman of the North American Regional Conference of Ikebana International in 1976, and has served on the Board of Directors of Chapter 1 continuously from 1972 to 2014. She was editor of the Chapter's newsletter from 1999 to 2003. Allie was also the Director of the Sogetsu Washington, DC Area Branch in 1980-1981, and the President of the National Capitol Area Ikebana Teacher's Association in 1975-77.

She has written numerous articles, including "What's Behind the Ikebana of Today?" in the National Capitol Area of Garden Clubs Bulletin, "Today's Trends in Ikebana", in Japanese Flower Arranging Newsletter, Boston, June 1988, and she contributed to the Encyclopedia of Japan in 1983, providing an article titled "Ikebana Abroad".

Allie has been a prolific demonstrator during her ikebana career, as well as contributing to special ikebana exhibitions all over the world, including Kabul, Afghanistan, and Ikebana International Regional Conferences. She also contributed ikebana arrangements to exhibitions at the US Botanic Garden, the US National Arboretum, the Smithsonian Institution, and the Embassy of Japan. She presented lectures on ikebana around the world.

In 2006, Allie chaired the 50th Anniversary celebration of Chapter No. 1, which included a year-long series of events and activities, with lecture/demonstrations at the Freer Gallery of the Smithsonian Institution and at the McLean Hilton, an exhibition at the US National Arboretum, a multiple day conference of demonstrations, workshops and ginzas (shopping markets) with Iemotos (school headmasters) from Japan from the Sogetsu and Ichiyo Schools contributing, and a gala dinner event.

In 2006, Allie and Cecil visited Japan again for the 9th World Convention of Ikebana International. While at the Convention, she began to research the topic of spirituality and ikebana, and began making presentations about this topic once she returned to the US.

At the 9th World Convention in 2006, Allie attended a reunion of long-time members, and was invited to a small dinner by Princess Takamado, the honorary president of the organization. A highlight of the Convention was an invitation to meet Empress Michiko, wife of the Emperor of Japan. At the close of the Convention, Allie was invited to give the Sayonara Banquet toast before a gathering of more than 1000 people and was presented with a beautiful gift for her service to Ikebana International.

Allie Uyehara was a tireless promoter of Japanese flower art, and a wonderful wife and mother who will always be missed by her husband, Cecil, and her children Vera and Geof.

A memorial service will be held at the Cedar Lane Unitarian Universalist Church in Bethesda, MD on Friday, April 12, 2019, at 11 AM. A luncheon / reception will follow.

Donations in memory of Allie Marie Uyehara may be sent to one of the following organizations.

The family would like to thank the kind and compassionate caregivers and nurses of Valley Hospice, especially Courtney and Linda, and also the incredibly wonderful caregiver and surrogate family member, Luz Elena Monge Esparza Baratie..