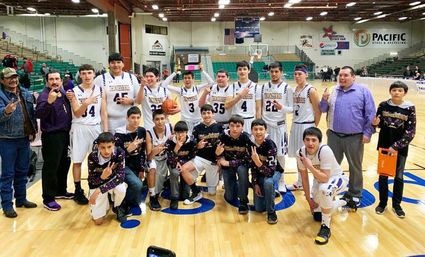 The Hays/Lodge Pole Thunderbirds proudly display their hardware from the Northern C Divisional after defeating the Winnett/Grass Range Rams. The Thunderbirds punched their state ticket with a challenge game win over the Rams in a rare Sunday afternoon contest. The Thunderbirds No. 2 N will take on the Melstone Broncs in the final game Thursday night at 8:00 p.m. Right: Head Coach Derrick Shambo said his team has been all smiles leading up to the state tournament and will be ready to go come Thursday.

The Hays/Lodge Pole Thunderbirds are headed back to the Montana Class C Boys Basketball Tournament after a second place finish at the Northern C Divisional.

The Thunderbirds have the most recent history of the three Blaine County Schools headed to state this weekend. Hays/L.P. finished third in 2006, won it all in all in 2007 and finished fourth two years ago in Bozeman.

Two players from this years team, senior Desmond Shambo and senior Kyle Young Jr. can draw on that experience to help this years squad out.

Head Coach Derrick Shambo has done a fine job helping his team return to the big stage in Billings this weekend.

The Thunderbirds list two juniors on the roster, Siris Grandchamp and Wyman Bringinggood as well as two freshman, Deshon Shambo and Tyshawn Shambo.

The Thunderbirds have been a balanced team all season long and will take a 18-8 record into the state tournament, something Derrick Shambo thinks might help their team out this week, "We have eight losses, their are four teams at state, Melstone, Manhatten Christian, Scobey and Chinook that are undefeated. Teams might be overlooking us when they see those eight losses."

Their only other loss came to the Turner Tornadoes by two points at home, but two weeks later at the District 9C Tournament they avenged that setback with a lopsided win.

The Thunderbirds may have eight losses but when they play their game, they are tough to beat.

"We've been working on some things, our box and one, diamond and one, some 3-2. We want to throw a few wrinkles at teams this week, give them something they haven't seen yet from us," said Shambo.

The Thunderbirds like to get out and run, play up-tempo basketball and are looking to be able to do that this week in Billings, but their primary focus in practices leading up to state has been on the defensive side of the ball.

We really have been working on bringing that defensive intensity," said Shambo. "Then if we can turn that into out transition game and run some teams, maybe get them into their bench, we can be successful."

"Ken (Blackcrow) has been our toughest defender all year long, so we'll lean on him a bit. We'll put him on their best offensive player, then when he needs a break we have guys that can step in and fill that role," added Shambo. "We do that I think we'll get teams out of their rhythm and be able to play our game."

Heading into this week the Thunderbirds have been able to get a little healthier and heal a few bumps and bruises but overall Shambo likes his teams focus, "They are relaxed, confident going into state. We have nothing to lose, nobody expects us to do anything. No one really thought we would even be here. All the other teams have the pressure on them and maybe, they will overlook us as well," added Shambo.

"It's been great these kids surprise me all the time. We are happy to be here, it means a lot to the them, the school and the community, but were not content with just getting here. We are ready to compete, we are not settling for just getting here," concluded Shambo.

The teams take on the moment very much reflects that of their coach and the coaching staff as a hole. "Making it to state, being one of the final eight teams, it feels great," said senior Kyle Young.

"We want to show people we can compete, going into state defense is our priority," added Young. "We want to play together, committed to each other, focused on our assignments. We can score the ball, any team can score, but if we can play solid defense then that gets us into our offense."

Young talked about his team coming together, "When we came into tournaments we were a little down. We had a little team meeting, told each other that when we play together we are a tough team to beat. We gave each other a little pep talk and now we are here."

"I expect to play at a high level this week, lead by example, help guide my teammates," said Young. "I'm proud to be here, to represent, my school, our community, Blaine County and the Northern C.

Senior Jeremy Pretty Paint added, "We are focused on each game, matching our opponents intensity, we really want to annoy teams defensively."

"We're competitive, we have fun. We are going to be ready to play and we have high expectations of ourselves," Pretty Paint concluded. 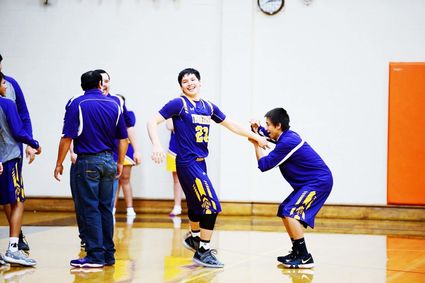 Senior Desmond Shambo added, "I got to play a little last time. I learned from that experience. It made me want to get in the gym, the weight room and put in the work necessary to get back."

"I always believed in us. We've been playing together since grade school, traveling all over. Playing all over, summer ball," said Desmond.

"Getting back, lifted a weight of our shoulders, now we can go to Billings and represent our community," Desmond concluded.

Coach Shambo and his team certainly have put the work, averaging 26 games each summer over the past few years.

The support of the Thunderbird fans is always welcomed and coach Shambo and his team expect to see plenty of purple in the stands in Billings.