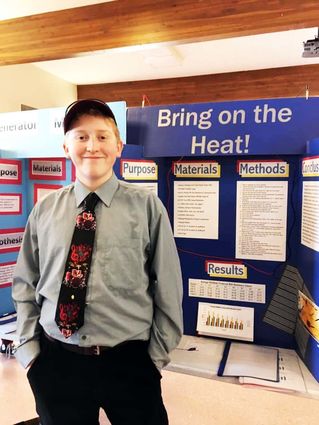 The Hi-Line Regional Science Fair was held March 5 at MSU-Northern. Students from Liberty, Hill, Blaine, Phillips, Valley, Daniels, Roosevelt and Sheridan Counties were invited to compete in a type of dress rehearsal for the state science fair. Although no Blaine County students competed in the event, three former Chinook High School students served as judges in a pool of several others who judged the junior high and middle school projects.

Joe LaPlante (2000), Christy Baker Smith (2002), and Adam Johnson (2007) used a rubric to assess science fair projects for their creative approach to the scientific method, the scientific thought or engineering goal employed, thoroughness of the display, and verbal presentation.

About his experience as a judge, Johnson, who currently works as a gas and electric supervisor for Northwestern Energy, said: "I was honestly very impressed by how advanced some of the projects were for the sixth grade. It was apparent that the students had put a lot of time and effort into the completion of their projects. I also admired how well they did with the presenting portion of the competition. I know I certainly wasn't confident with public speaking at that age! I enjoyed the experience and would gladly do it again."

Another Chinook tie surfaced when Aaron Boysun, an eighth grader from Frontier School, a rural district near Wolf Point, won second place overall for his Bring on the Heat project. Boysun placed behind Trevor Green, an eighth grader from Culbertson who thrust into first place at the junior high level with his project that studied jet propulsion using concepts from cephalopods. About Green, one judge commented, "I was very impressed with him and his advanced scientific thought. His project reflected college-level engineering, in my opinion."

Boysun, who explored how temperature change affects the power output of a solar panel, is the son of Wane Boysun and former Chinook High School teacher Kitty Boysun, who taught business courses from 2001-2004. She stepped away from teaching when Aaron was born in 2005.

The Boysun's moved to Wolf Point to operate the family farm when Aaron was in third grade. Although Mrs. Boysun served as a substitute her first year in Wolf Point, she has been teaching there ever since. She currently functions as the fifth and sixth grade technology instructor at Frontier School, which serves 140 K-8 students. But as is typical for small, rural schools, Boysun actually works in multiple roles.

"I oversee an advance reading/language arts group for a grant, as well as teach business electives, third and fourth grade keyboarding, and two science research intervention classes, which supported fifth and sixth graders preparing for the science fair," Boysun said.

She is also the school's tech person, which means that any repair and maintenance of the computers and the student information system or whatever else technological the school can find for her, she does. "I stay very busy, and my days are never boring," Boysun exclaimed. On the home front, she also looks after the farm finances and operates equipment as needed.

Boysun's son, along with several other scientists, will attend the Montana State Fair.

Director of the Regional Science Fair, Melanie Schwarzbach, who is also a science teacher at Big Sandy Schools, explained that junior high students are eligible to compete at the state level, regardless of how they place at the regional fair. "Montana Science Fair eligibility is a determination generally made by each school, and different schools have different criteria for state fair attendance. Students are actually not required to attend the regional fair before attending the state fair," Schwarzbach said.

According to Dr. Earle Adams, Montana Science Fair Director, this year, nearly 350 students from across Montana will showcase their mastery of the scientific method in the 64th Annual Montana Science Fair, which will be held Monday, March 18, at the University of Montana's (UM) Adams Center. The Awards Ceremony will be held the morning after the science fair in the UM Dennison Theater. An estimated $15,000 in prizes will be awarded, including up to four all-expense paid trips to the Intel International Science and Engineering Fair (Intel ISEF), which will be held in Phoenix, Arizona. Intel ISEF is the world's largest international pre-college science competition.